People of Bath called on to play a part at the European Champs on their doorstep as top Olympic sport comes to Bath this summer.

Bath will be the focus in August when Britain battles the rest of Europe for medals, titles and Tokyo Olympic qualifying places in the sport of Modern Pentathlon.

Organisers of the event – Gladiators Return – are looking for local people to feel part of it as “Gladiator Makers” when the European Championships take place from 6-11 August 2019. 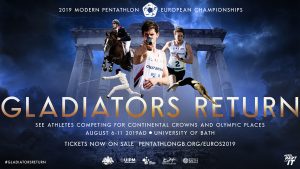 This is the biggest Olympic qualifier in the sport which features the excitement of horse-riding, fencing and laser-shooting as well as the more traditional but still crucial disciplines of running and swimming.

Everything will take place at the University of Bath’s £multi-million sports venue with thousands of spectators expected for the televised event.  There are individual competitions as well as men’s, women’s and mixed relays.

Sara Heath, CEO of the sport’s national governing body which is based in Bath, said: “We are shouting out to local people first so that they are given the opportunity of signing up to join our Gladiator Makers team and savour the excitement of volunteering just like the Games-makers of London 2012. Our volunteers will not only support the GB athletes, but also those we are hosting from around Europe. It’s a great opportunity to experience being part of a big event, seeing behind the scenes and being up close to the action”.

Pentathlon GB is seeking up to 100 volunteers in diverse roles including medal ceremony attendants, helping with the media on site, supporting overseas teams and helping on the field of play.

Anyone interested in volunteering for the build-up and/or at the event itself can visit the event website pentathlongb.org/euros2019 to find out more and click on the “Get Involved” button.

Local people will have until 31st March to take up the chance to be involved before the search goes nationwide next month.

Jamie Cooke, the current men’s World Champion, summed up just how important this event will be to the GB athletes when he said: “The Europeans are one of the first and biggest chances of qualifying for Tokyo so the competition will be incredibly fierce but we are all looking forward to the challenge. What makes it even more special is having the Europeans in our home training city of Bath”.

Courtesy of the Team Bath Press Office via Matchtight Ltd.