England will wear an exclusive kit at this summer’s FIFA Women’s World Cup for the first time.

The new Nike kits, both home and away, will be donned by the squad as they prepare to mount their campaign at the finals in France this summer. 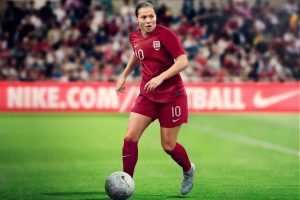 Fresh from victory in the SheBelieves Cup, Phil Neville’s side will first sport the home version in their meeting with Canada at Manchester City’s Academy Stadium on Friday 5 April and throughout their ‘Road to France Series’ fixtures.

The Lionesses’ new kits have been designed by Nike with unity in mind, tying the team to the country at large.  A fresh take on the traditional white kit, the 2019 England Women’s home look is accented by dark red cuffs.  The socks debut a custom hand-drawn print for the Lionesses, highlighting specific flora native to the counties and regions of England which combine together to represent the entire country.

Though used sparingly on the home kit, this pattern forms the basis — covering both shirt and socks — for a brilliant new articulation of England’s classic red away strip.  Rendered in a dark red crush, a unique darker shade exclusively for the women’s team, the kit incorporates the St. George’s Cross on the shirt and a tonal crest unique to the Lionesses.

Baroness Sue Campbell, The FA’s director of women’s football, believes the introduction of the new kits demonstrates how far the women’s game has come on the world stage.

She said: “It’s the first time our women’s team have had their own unique and exclusive kits which is a real marker of progress and an indicator of how much the profile of the women’s game has grown in this country.

“We are all looking forward to the World Cup and I know the players can’t wait to wear the new kits.”

Forward Fran Kirby said: “It is great to see kits designed specifically with us in mind. The home kit seems really classic while the pattern of the away is exciting and new.”

Looking ahead to the tournament, captain Steph Houghton added: “We have gone close a couple of times now and the response has been amazing.  It feels like there is genuine momentum behind the team, bigger and bigger with each major tournament we play, and another successful summer can really help push women’s football to the next level.”