England Netball and the National Federation of Women’s Institutes (NFWI) this week celebrated the growth and success of its partnership, which began more than one year ago. 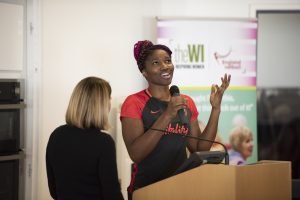 The aim of the partnership between the two trusted female organisations is to empower women through physical activity and netball. This has led to a project that looks to introduce Walking Netball sessions to WIs across the country, and to train WI members as hosts to allow them to continue delivering the programme in order to leave a lasting legacy and encourage WIs to stay active.

On Wednesday 20th February, WIs from across the country came together at Denman College, the home of the NFWI in Oxfordshire, to celebrate the growing participation of WI Walking Netball. 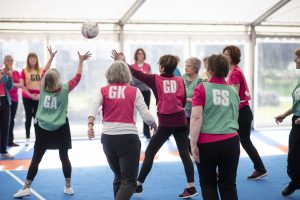 The day began with a welcome from Lynne Stubbings; the Chair of the NFWI, and was followed by a Walking Netball demonstration on a pop up court, then a talk and Q&A with Joanna Adams; the CEO of England Netball, and Ama Agbeze; Commonwealth Games gold medalist and Vitality Rose. The day was then concluded with a ‘have a go’ session, where all attendees grabbed their trainers and took a shot at Walking Netball.

Joanna Adams, CEO of England Netball, said: “We are delighted by the staggering success of this partnership with the NFWI. When we first met to discuss setting this project up, we knew the NFWI were the perfect fit for us as they have a shared commitment to empowering women across the country.

“This project, which is funded by Sport England, has already helped improve the health and wellbeing of many WI members across the country. We know how beneficial this sport can be, which was made evident at the celebration event hosted this week at Denman College.

“It was wonderful to see so much laughter and fun on the court and to see how far this partnership has come in the last year alone. We are looking forward to what the next year has in store and to continuing our work with the NFWI.”

Lynne Stubbings, Chair of the NFWI, added: “The partnership between the WI and England Netball has been hugely successful and has demonstrated what two inspiring women’s organisations can create when they come together.

“We have loved seeing the success of Walking Netball in its first year. WIs up and down the country have embraced this project from the outset and thoroughly enjoyed taking part in a team sport which is fun, inclusive and rewarding.

“The feedback we have received from members has been fantastic. Many have remarked on how friendly Walking Netball is, it allows you to go at your own pace and anyone can play, regardless of age or fitness level.

“We are looking forward to another exciting year of Walking Netball and hope to see many more WIs get involved.”