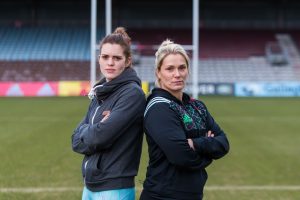 Both athletes have had phenomenal careers in their respective sports thus far, with Kelly the first female jockey to win a Grade 1 race in December 2015 with Tea for Two in the Kauto Star Novices’ Chase at Kempton, while Burford was a key member of the England Women squad that won the Women’s Rugby World Cup in 2014.

They are both in training for huge upcoming events in the sporting calendar, with Kelly set to compete at the Cheltenham Festival in less than three weeks’ time, after having her first winner at the Festival last year on board Coo Star Sivola in the Ultima Handicap Chase. Burford is part of the England Women’s Six Nations squad that faces Wales at Cardiff Arms Park on Sunday, while her club side Harlequins Ladies are challenging for the Tyrrells Premier 15s title and will host The Game Changer at the Stoop against Gloucester-Hartpury on Saturday 30th March.

Kelly, 25, and Burford, 32, showcased their remarkable athletic ability during the challenge, and provided some unexpected results in the four tests they undertook. The exercises that formed the contest were. 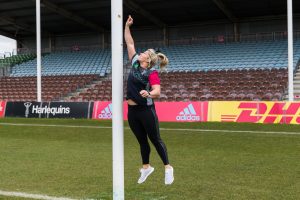 Lizzie Kelly, winner of two Grade 1 races in her career so far, said: “I hope I showed to people the fitness and strength that jockeys have to have in order to compete on a daily basis. In sports like rugby, professionals have a lot more coaching and training than jockeys do, so I imagined before that Rachael was likely to beat me. It was nice to see that I could hold my own against someone who has represented their country more than 80 times in a sport like rugby.

Rachael Burford, Harlequins Ladies and England centre, said: “I thoroughly enjoyed pitting myself against Lizzie in this set of fitness challenges. As an elite athlete, I relish competition, and to be able to go against a top-class competitor from a different sport was extremely exciting. Lizzie showed the kind of shape you have to be in to be a top jockey and she certainly opened my eyes to the challenges that her training programme provides – of course I’m talking about the Equiciser! I wish her the best of luck for the rest of the season and hope to welcome her back to The Stoop for The Game Changer on Saturday 30 March.” 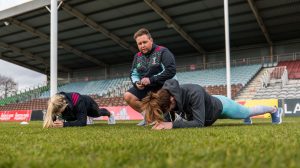 The challenge began with the plank, a common isometric assessment to measure core strength. Kelly and Burford were expected to perform well in this exercise, with both athletes requiring a huge amount of core strength to be successful in their respective sports. The Harlequins Ladies centre outlasted the Grade 1-winning jockey after an impressive three minute hold from both athletes to take a 1-0 lead.

Turning the tables on Burford, Kelly then produced a giant leap in her final effort of three in the Vertical Jump. The distance between Kelly’s standing height and her jump was measured as 0.49cm, leapfrogging Burford’s effort of 0.47cm and drawing her level in the contest at 1-1.

With the challenge fascinatingly tied halfway through, watch the full video to find out how the rest of the Jockey vs Rugby Player unfolded HERE 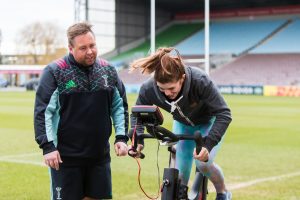 Yariv Kam, fitness coach at the British Racing School, commented on the challenge: “I think the result of this contest really demonstrates the qualities and the level of peak fitness that jockeys need in order to compete. Jockeys shouldn’t be ashamed of competing with disciplined professional sportspeople.

“In terms of the challenges themselves, for Lizzie to then win the Vertical Jump and the Wattbike emphasises that jockeys really do need strong legs, it is so important on the horse for jockeys to keep their legs working in order to hold a streamlined position with their core and upper body.

“Finally, what an effort to see Rachael stay on the equiciser for a minute at that sort of level. We find here at the British Racing School that people really struggle on the equiciser on their first time of giving it a go, so that was really impressive. 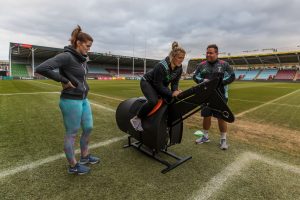 Rachael Burford has a go at the equiciser (Photo: imagecomms)

“Congratulations to both Lizzie and Rachael on their amazing performance!”