Sarah Hunter told her troops: ‘what the French need is momentum; so we’ll not let them get it.’

And they followed her advice gloriously in the first half, as they posted four unanswered tries on the scoreboard; enough to take your breath away. And it might have been five, only an initial majestic move which saw Sarah McKenna sweep over the line fell foul of the TMO. He had spotted a French forward being held fast by an English one as the move developed. No try. 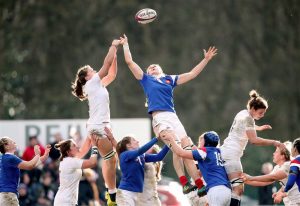 Never mind. Within five minutes Katy Daley-McLean hoisted another cross-kick – this time left to right, and Jess Breach won the tussle in the air to score a dramatic opener. When KD-M converted, it took her over 500 points, a quite colossal achievement, surpassed only by Jonny Wilkinson and Owen Farrell in English annals. 7-0

And she was on point in so many facets of the game, helping her backs to create some glorious plays throughout. She is so central to England’s game-plan these days that, even when her heir-presumptive, Zoe Harrison, came on, she had to move to inside centre

France threatened dangerous attacks, but couldn’t at this early stage keep the momentum going. Handling was fallible and thunderous tackles were going in; yardage was being conceded most unwillingly. The Red Roses even nicked a scrum against the head on their own 5-metre line, and Kelly Smith took the ball to safety on the 22.

We had to wait nearly half-an-hour for England’s second offering, but it was worth the wait. The ball was won in midfield and moved left. The French just managed to haul Smith down short of the line, Poppy Cleall was on hand to cross by her own methods. 12-0 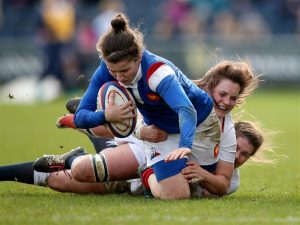 Pauline Bourdon was the heart of every French attack – there is a player in the running for Player of the Tournament, if not one stage better.

All three of France’s greatest forwards, Lénaïg Corson, Safi N’Diaye and Romane Ménager, made threatening runs, but all were halted before they could do irreparable damage. Professionalism certainly seems to have sharpened the defensive qualities of the host squad.

England won a turnover in midfield and moved the ball left. Emily Scarratt then placed the most perfect running kick through for Smith to chase down her wing. It bounced uncomplaining into her hands and she was over. 19-0

To complete a devastating 40 minutes, the Roses indulged in a complex handling move which left McKenna handing on to Breach for her second of the day. 4 caps, 14 tries. I need more fingers.

The tackling had been brutal throughout. Only Vickii Cornborough was sent to the bin for a high tackle. During her absence the Roses coolly scored two tries!

We didn’t need to be flies on the wall to guess what was being said in the French changing-room. They promptly came out and showed their true worth. It was good seeing Marine Ménager make a telling run into English territory for Bourdon to give a devilish inside pass to N’Diaye who completed the first French try. 24-7

To the management’s delight, England responded at once, using their trusted pods of three to allow Cleall to cross for her second 29-7

Heyraud and Cherouk showed what they thought of the proceedings by bringing replacements on far earlier than they would have planned: Rivoalen for Imart, that is a No 9 for a No 10 – to let Bourdon show another facet of her skills by switching to outside-half. Hardly five minutes later she was through, thanks to a brilliant dummy in front of England’s No 10, who was helpless. This forced spectators to do some mental arithmetic: were the French getting dangerously close? 29-12 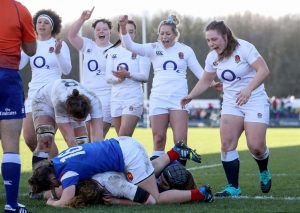 Oh ye of little faith! Five more minutes and Leanne Riley (pictured above) made her first break of the day. It took the defence so by surprise that she wasn’t hauled down till she could smell the whitewash. But a try remained just beyond reach. The English tactics were based broadly on quick ball to the backs or forward rumbles and blends of the two. The kicking too was varied and telling. But it would be nice to see Riley mix her game up with the occasional box-kick or snipe on her own, as here.

The first unenforced English replacements came before the three-quarter mark, and they were the youngsters, Beckett and (the returning) Botterman. Another set of efficient pick-and-goes led to a try by the same Hannah Botterman 36-12

Now England could really open out. The game kept up its relentless pace, and France were a long way from buckling. Cath O’Donnell was on hand to finish off another assault on the left wing. 41-12

The French refused to accept their fate. Six minutes from time Bourdon made a break to go over again and convert. 41-19

And before Tim Baker could blow the final whistle, Romane Ménager got her just deserts with a fourth (and bonus-winning) try.

The shape of the game bears an uncanny resemblance to the England-USA pool game in the World Cup. There the Roses romped onto a 47-26 win after leading 33-7 at the break. In neither game could they maintain their defensive wall in the last quarter; the enemy crossed multiple times. England won’t be happy at conceding 26 points.

Player of the Match: Jess Breach

This was a quite splendid match, played at a furious pace. Any ex-player looking on must surely have marvelled at the fitness and skills displayed by both sides. Only one other nation in the world can match their current standards.

For the Red Roses, this was a triumph. Simon Middleton admitted afterwards he thought his side’s performance was outstanding. He was delighted with the physicality and proficiency on view. There was some looseness around the scrums and rucks but that can be sorted out. He reserved special praise for the backs who showed remarkable cohesion and penetration. Individual players are widening their skill-sets before his eyes.

Neither he nor his captain was willing to say ‘Job done; that’s the Grand Slam sorted’, but their smiles said it for them.

The 6 Nations Table after 2 Rounds:

The most dramatic episode of the weekend

The prize must go to the try that wasn’t. Not England’s, but Wales’.

In the tightest of tight games, Elinor Snowsill took the ball going right; she spotted Jaz Joyce out wide on her own 22, and apparently covered. She threw an overhead pass, Joyce took it, fended one, then another defender and was off. From the touchline, she swerved infield, harried by the hounds of hell. She escaped the last attempt at a tap-tackle and was over, under the posts. The Welsh girls whooped.

Then the TMO saga again: ‘It was a forward pass. No try.’

In a game of the narrowest of margins (one penalty each) this was a devastating  blow to take.