Tyrrells Round 15 – Two Games to Savour

First to Twyford Avenue, to see if Wasps could stave off both DMP’s assault and – more urgently – Gloucester-Hartpury’s challenge to their right to the play-offs. 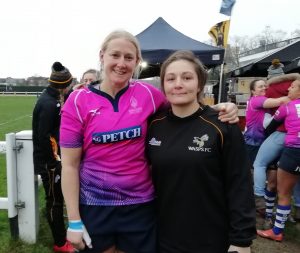 DMP had a player called T. Taylor listed on their bench, and sure enough, Tamara at last appeared in the second half to add further vigour to their challenge. They have missed her sorely.

By then, they were already 33-0 down, thanks to a spirited display by Wasps who were anxious not to let their lead over Glos-Pury slip away in the winter gloom. It took them only five minutes to put Katie Alder with a powerful drive. Lizzie Goulden converted. 7-0

Wasps were showing the form their coach and all their fans must have been hoping for all season. Goulden scored a try of her own to stretch the lead further. 21-0

​It didn’t help the visitors’ cause that a fumble near their line let Louise Dodd in for the easiest of the tries thus far. 28-0 and a vital bonus point

DMP were quite capable of nice snatches of play, but couldn’t keep possession long enough to threaten Wasps’ line.

The cross-kick is thoroughly in fashion these days. A beauty from Goulden brought the hosts another try, thrillingly taken at full pelt by Abby Dow on the right. 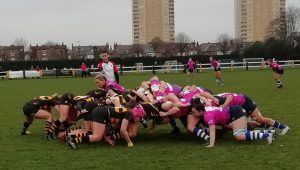 Were DMP down and out? Not a bit off it. Inspired no doubt be the reappearance of England’s great lock forward, they proceeded to give Wasps a taste of their quality. First a German international forward who shall remain nameless delayed her pass for a fraction of a second. It fell into the hands of Igemi Ekoku, who beat all the cover defence down the left wing. 33-5

Before Giselle Mather could complete her complaints about her side’s frailties, they calmed her by scoring two more tries through Kendall Templeman and Sarah Mitchelson, to confirm their superiority. 43-12

They had produced more fluent combined play for longer periods here than they have managed for most of the season. This was a performance to reassure them of their right to compete in the knock-out stages.

If that game in London was a worthy contribution to the reputation of the Tyrrells, then the late kick-off in deepest Gloucestershire was on a different plane entirely. Here we saw two immensely talented teams slogging it out with brilliant combined play across the field. For once, the accuracy in the open was some degrees better than at the scrum and line-out. It’s rare to find so much excellent midfield thrust from both sides.

Tatyana Heard showed why England have taken such an interest in her development. After her early try, she made repeated inroads in the Sarries’ defensive lines, offering gilt-edged off-loads in tight traffic. And Milly Wood showed what strength England possess at centre. While she failed to be awarded a contract, her performance was a telling counter-balance to Heard in attack and defence.

If Glos-Pury fail to make the knock -out stages, it will merely underline the quality of the elite division. Their back line, now under the persuasive command of Mo Hunt, is a threat on all fronts. Outside her, they have Ceri Large, herself a distinguished England No 10 – both of them hail from the Drybrook club, who can be intensely proud of that double achievement – then beyond those two centres we have Ellie Underwood who combines expert place-kicking with sprightly running, and Kelly Smith, who is scoring tries just for fun these days. She is a constant threat with ball in hand and has now, I believe, topped the 20-try mark this season.

So how did Sarries manage to win? For the second game running their pack came under heavy pressure at the set-scrum. They must be missing Ellena Perry more than anyone realised. But when it came to rescuing tricky ball and driving on regardless, they proved almost unstoppable. Bryony Cleall was her usual tower of strength at No 8 (12 tries now) and Hannah Botterman continued to make life unappealing for her tacklers.

Out behind, they have players of extraordinary quality. Sarah McKenna once more displayed stunning skills in her handling and running play, and Zoe Harrison showed touches of brilliance with hand and foot to leave England selectors purring.

And when Sarries can afford to bring on two England players of the quality of Georgie Gulliver and Lauren Cattell late in proceedings, you can see how blessed they are.

Still, it was a mighty close shave for them, close enough for Glos-Pury to pick up 2 bonus points – but they will be upset at not managing to overtake the invader in the closing seconds of a palpitating match.

1. It was slightly worrying to see that 13 of the newly contracted professionals were missing from the day’s contests. One or two may have been diplomatic absences, but others are known to be due to long-term injuries. There is just one more round of fixtures before the 2-month break for the 6 Nations. We must hope and pray that that injury-list grows shorter, not longer.
2. Just three rounds to go and one crucial issue remains: which four clubs will qualify for the knock-out stages? Three of them are booked in, Saracens, Quins and Lightning. The fourth place is on a knife edge and deserves a closer look. Here are the remaining fixtures for the two clubs concerned:

Wasps have the slightly easier run-in:

1. They have 2 home games to Glos-Pury’s 1
2. The clash between the two clubs is on their ground
3. They have to face only one club placed higher than them; G-H two
4. They have a 4-point advantage

When the two sides met in Round 9, Wasps won 26-10. The game clashed with the England-Ireland international, G-H sending three players to the game, Wasps one. G-H have a much more potent back line, made even sharper with the acquisition of Mo Hunt. They have scored an astonishing 107 points more than their rivals, but they are 82 points leakier in defence. Wasps would need to establish a strong forward domination to overcome the likely deficit in attack. But with three capped backs on the strength, they should have the means to deny the opposition. A fascinating contest in prospect.

3. Then the question that underlies the whole operation: why can the side finishing top in the regular season not be sure of popping the champagne? Why bother reaching the national pinnacle after an exhausting campaign, if you lose a knock-out game? It’s not so likely in the present Tyrrells set-up, but it certainly happened last summer in cricket’s Kia Super League matches. Loughborough Lightning finished top; but on play-off day they came third out of three. Surrey Stars, who came third, won the trophy on the Big Day. The curious rewards of modern sport.
Tags: rugby, Tyrrells Premier 15s