Wasps fell to a 17-45 defeat to Saracens as they succumbed to a dominant set piece from the league leaders. The visitors ran in seven tries, five through the driving maul. The hosts went close to picking up a try bonus point but were denied at the death. 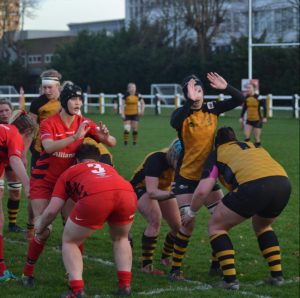 After an early penalty from Lizzie Goulden, it was Saracens who scored the opening try; May Campbell finishing a strong driving maul for the visitors. Sarah McKenna picked up the second try shortly afterwards as she weaved her way through the Wasps defence to score.

Further Saracens pressure told as they extended the lead to 3-17, with Hannah Botterman finishing off another maul before the half time whistle.

Wasps looked to fightback early in the second half as Amy Cokayne intercepted a pass and raced towards the try line. However, a high tackle stopped her just short of the line, leaving the referee no choice but to award a penalty try. Georgie Lingham picking up a yellow card in the process, the deficit reduced to 10-17. 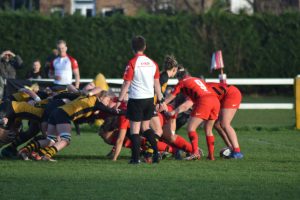 The league leaders continued to control the set piece as they picked up three further scores from the maul to put the game beyond doubt. May Campbell and Hannah Botterman finishing the scores alongside a penalty try. Sarah Mitchelson received a yellow card on her 175th appearance for Wasps from the penalty try. They picked up their seventh try through Zoe Harrison with 10 minutes remaining.

Wasps got a third try five minutes from time. Louise Dodd cutting an excellent line before delivering a fantastic pass to Claudia Macdonald, who crossed for her seventh of the season. Wasps were hammering on the line as the clock ran out looking for a fourth try and bonus point, but Saracens won a penalty and cleared to end the game.

With the Christmas break now upon us, Wasps will enjoy a two week break before returning to action against rivals Richmond in the new year. Sitting in the final playoff spot, Wasps will be looking to ensure they continue to put pressure on the top three with five games remaining before the playoffs.