First, the totally unexpected news of the first award of contracts – and their recipients, Emily Scarratt, Mo Hunt and Jess Breach, no less. All three are major gains for the Red Roses’ prospects, but the most significant is the last named. Here is a young player opting against the prospect of an appearance at the Olympics. A real and necessary boost for the 15s game on the world front.

Breach returns to her grateful home club Quins, but Scarratt and Hunt had to seek pastures new if they were to perform at the elite level. So Lichfield lose their last two remaining stars to Lightning and Gloucester-Hartpury respectively. These choices take them closer to their native heaths, but Lichfield must wonder how much compensation they would be worth if this was the world of American basketball.

You are permitted to imagine Simon Middleton rubbing his hands with glee at these Christmas tidings.

Then the welcome news of the long-awaited return of Laura Keates to Valkyries’ colours after 19 months out with a ruptured achilles. And the club has been busy in the transfer market: Meg Goddard resumes after a two-year spell with Gloucester-Hartpury; Sioned Harries (Wales No 8) has joined the strength, while Angharad De Smet (Wales Development 7s winger) who signed on at the season’s start is at last available for selection. 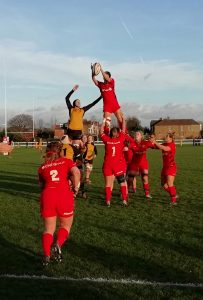 Sardines win the line out (Photo B Perkins)

This game last season was one of the crackerjacks, a single late try by Nolli Waterman downing Sarries’ colours for the first time.

Wasps started this one well, driving down the slope and pinning Sarries against the clubhouse wall. But several charges failed to bring the try they needed. When offered a penalty, they opted to kick the points. Though these were the first points conceded by Sarries for 52 days, you wondered if this was an over-defensive option. 3-0

Sure enough Sarries then marched back up the slope and practised their first catch and drive of the day. It worked. Try May Campbell 3-5

Next Sarah McKenna gave further proof of her right to the England No 15 jersey. Pinpoint passes gave her a flicker of an opening. Still around her own 10-metre line, she danced past several opponents in midfield to run clear for a glorious try 3-10 Much later she will field a kick cleanly down by her ankles, then plant a wicked return deep into the corner. With Nolli Waterman and Ellie Kildunne both out of the reckoning for England, the Sarries’ full-back can fill a crucial gap in the nation’s defensive armoury.

Hannah Botterman responds to being high-tackled by finishing off the catch and drive that follow. 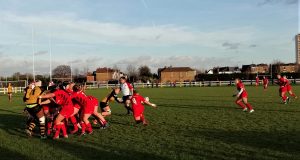 Georgie Gulliver wings the ball out wide (Photo B Perkins)

Wasps start the second half well. When they threaten the line, Georgie Lingham is found guilty of a high tackle, Result: a yellow and 7 points. 10-17

But for of the bulk of the remaining contest it’s one-way traffic. Wasps simply cannot handle Sarries’ strength up front, and with Georgina Gulliver sending out a stream of accurate passes to Zoe Harrison and her back row, all the hosts can do is hang on. Now Campbell picks up her second from another unstoppable drive. 10-24

It’s good to see Harrison able to put foot to ball again after her injury.

Now it’s Sarries’ turn to get a penalty try, from that pet-hate of modern-day refs, pulling down the maul. 10-31 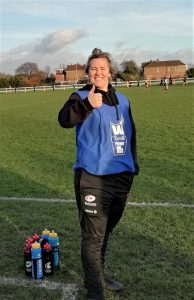 How do you halt an onslaught like this? Bryony Cleall is showing the form that makes you wonder whether another promising No 8 Sarries possess can win her place back. Botterman picks up her second by means that don’t need describing. 10-38

At last the threes get in on the act: Cara Wardle breaks and offloads decisively to Harrison on the left. 10-45

It’s hugely to Wasps’ credit that they come back so strongly in the closing minutes. Their attacks amount to only a single try, but it’s a fine one: Louise Dodd makes ground and offloads for Claudia Macdonald to show her pace into the corner. Any such score against the table-leaders these days should be worth double.

Signal achievement: this was Sarah Mitchelson’s 175th appearance for the Amber-and-Blacks!

Elsewhere, two of the three contracted players are assigned to their respective benches. Scarratt can stay warm. Breach is summoned to the front line at half-time (22-0), when the game with Worcester is already there for the taking. Sure enough she scores the final try of the afternoon. But she’s got a way to go to outstrip Heather Cowell who planted her 14th and 15th tries of the campaign. Perhaps the visitors can be relieved to concede under 50 points to such a strong outfit.

Just when that surly teacher was writing the Bears’ Autumn report – ‘Most disappointing. Must try much harder.’ – they do, beating Lightning in another nail-biter! This must be a most heartening result for them after a number of dispiriting performances. But if Emily Scarratt had been playing…

Lightning now have three of England’s greatest players – ever – on their books. Their rise to prominence this season ought to take on even more menacing shape for Sarries and Quins, but not if they can’t deal with lower-table opposition before Scarratt makes her debut for them. And that must wait till January 12 at the earliest, the date of the next round. That’s when Sarries take on Quins at Allianz Park; another major battle in store.

Wasps’ lead over Gloucester-Hartpury now reduced to a single point.

Lightning’s latest acquisition [Emily Scarratt] adds to the gulf set between the haves and the have-nots. Surely it’s not in England’s interests to have an entire Red Roses squad pickable from those three clubs, leaving the others gasping behind them. Is this how the RFU imagined the Tyrrells project initially? Imagine a composite XV from Sarries, Quins and Lightning alone. How far would it differ from the next side Simon Middleton selects?

– with several more caps waiting in the wings