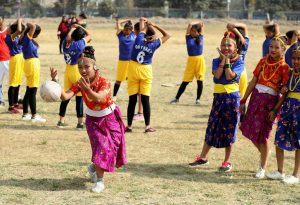 World Rugby’s Project Asia 1 Million target, a key part of the Rugby World Cup 2019 Impact Beyond legacy programme, edged a little closer on Saturday (8/12) as 2,500 people took part in a huge rugby festival in Kathmandu’s Tundikhel Park.Opened by the Vice President of Nepal, Nanda Kishor Pun, adults and children from around the city took part in a day of events, which saw many get their hands on a rugby ball for the very first time, as Nepal Rugby works hard to grow the grassroots game. The event also treated attendees to music as well as the chance to see the Webb Ellis Cup as part of the Rugby World Cup 2019 Trophy Tour.The Trophy Tour supports World Rugby’s Impact Beyond Programme which aims to use World Rugby tournaments as a catalyst for the growth of the game around the globe. Project Asia 1 Million, part of Impact Beyond, aims to attract one million new rugby participants by 2020, and has already involved over 900,000 people across Asia.

World Rugby Chairman Bill Beaumont said: “It is fantastic to see the impact the famous Webb Ellis Cup is having in inspiring new players to participate in rugby around the world as part of the Rugby World Cup Trophy Tour. It is an exciting time for rugby in Asia as participation and fan growth accelerates rapidly throughout this youthful continent with the first Rugby World Cup to be hosted in Asia now just around the corner. Japan 2019 is set to be a game-changing moment for rugby globally.” 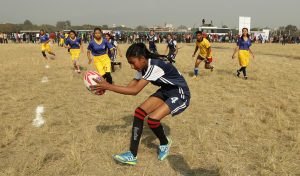 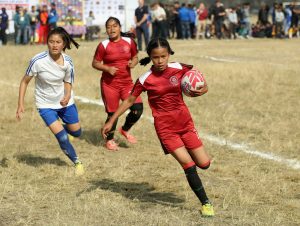 The visit to Kathmandu also saw the Webb Ellis Cup hosted by the Japanese Ambassador to Nepal, Mr Masamichi Saigo. The special reception brought together the hosts of Rugby World Cup 2019 with the hosts of Rugby World Cup 2015, represented by the British Ambassador to Nepal, Richard Morris. The Trophy also visited some of the spectacular temples around Kathmandu, including Swyambhunath temple (monkey temple), Patan Durbar square, Boudanath stupa and Pashupatinath temple.Nepal was country number 10 on the 20-nation journey and the final stop for 2018. It was the 5th time the trophy has visited Asia on this tour, with previous stops including Hong Kong, China, The Philippines and India The next stop will be Malaysia in January as excitement continues to build for Asia’s first Rugby World Cup in Japan. Next year will also see the Webb Ellis Cup visit Pakistan, Brazil and Chile in the lead up to the tournament.