In the reverse game (Round 3), Quins came unstuck in the rain. This time round they would be as near full strength as makes little difference. They had seven England caps on the field plus two other internationals, Konkel (Scotland) and Sommer (USA). Against these riches Lightning could pit only five Roses. But the crucial edge came in the front row. Lightning were missing Justine Lucas and DaLeaka Menin. Now Shaunagh Brown could prove that the England selectors’ decision to move her there was the right one. 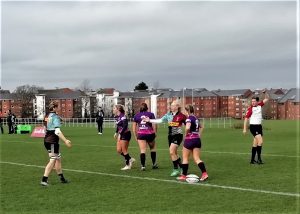 Quins made good first use of the strong SW wind that blew across the plateau. After Brown’s opening thrust the ball soon moved deep into Lightning’s half, where it decided to stay for most of the first 40 minutes. It swung right for Heather Cowell to show why she is the first-choice No 14 these days. Ellie Green’s conversion was a masterpiece of power, timing, and radar-controlled accuracy from wide out. 7-0

The Quins’ pack started turning the screw to earn a string of penalties. The wind gave them an early advantage they weren’t to concede. From one of many 5-metre scrums Leanne Riley pounced. She sped round the blind-side, sold an expensive dummy and dropped over the line. Green proved that luck was playing no part in her processes: another equally demanding kick sailed over. 14-0

Though much of this first half was played out in the visitors’ defensive zone, both sides knew a 14-0 lead was very vulnerable. With a player of Katy Daly-Mclean’s talents at the helm, Loughborough could easily overhaul a 2-try lead. But just before half-time Quins displayed their accuracy in the passing game, sending the ball out wide to the left for Georgia Newman to add an important third try. To show she is human, Green’s third kick hit a post – the far post! – and bounced back out. 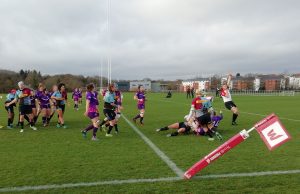 If Lightning hoped they could repay the hosts in the same coinage in the second half, they were sadly disappointed. Against all expectations, the ball now spent most of the time at the top of the hill, into the wind, as the Quins pack really made their opponents pay for their weakness. Somewhere there must be a record for the number of times one side opts to take a scrum rather than kick a penalty. If it does exist, Quins must surely have beaten it by a street. And this, remember, was against the club sitting second in the table, and long-time leaders who had won the reverse fixture by 23 points.

Riley really came into her own now. When Lightning won a clean line-out, she somehow managed to make an interception where you would expect the opponent’s No 10 to be. Not satisfied with that, she hared off over the horizon with barely a grasping hand laid on her. 31-0

Later in the game she made a break of a quite different order, sweeping wide right and executing a perfectly timed offload to a grateful Cowell for her second try.

In amongst, Loughborough managed to restore an ounce of pride by mounting one sustained attack. A midfield penalty led to a line-out close to the home line. From there the pack drove and drove so at last they could put points on the board. 31-7 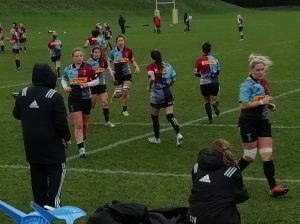 So pleased were the Quins’ co-coaches with proceedings that we had the rare spectacle of three Red Roses and an Under 20 international – the skipper Rachael Burford, Leanne Riley, Abbie Scott and Ellie Green, all being replaced at the same moment. And there was still time for an Irish international, Leah Lyons to add to the opponents’ discomfiture in the tight. It was fitting that a forward, replacement Chloe Edwards, chalked up the last try as time was running out. Nice to have yet another England No 10 – Emily Scott moved up from the back – to send the conversion over. 43-7

Riley was simply magnificent throughout, sending out a stream of accurate passes that mocked the wind, making devastating breaks close in and far out and chivvying her pack who responded with their most dominant performance of the season.

Quins now jump above Loughborough in the table, but their shirt numbers remain obstinately invisible. Perhaps they are all shy.