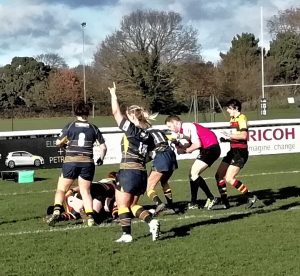 Valkyries are over (Photo: B Perkins)

If ever the Valkyries  had a game for the taking, this was it. After leading 7-15, they leak a try (14-15).  Now Vicky Laflin makes a dramatic break from inside her own 10 metre line and is hauled down 5 metres from home. What follows may explain why the club is still waiting for a first victory after 29 attempts. For the next two minutes the forwards batter at the defensive wall, while the backs look on, wondering why they aren’t allowed a sniff of the ball. After all, they had a 3-woman overlap the first time it should have spread wide. The lack of spatial awareness in those crucial moments spoke volumes. Sure enough, the assault ended with an interception that allowed the hosts to clear outside their 22.

To Richmond’s credit, they redoubled their efforts for Laura Kapo to score a decisive try under the posts on 75 minutes. The Valkyries had displayed huge zest in attack, and the gaps in defence were less visible than on previous occasions. But small inaccuracies in ball-management meant other chances went begging

Richmond lost flanker Libby Povey to injury after just four minutes, but eight minutes later only determined defence by Laflin forced a knock-on over the visitors’ line. The first decisive moment came when Richmond paid for a string of penalties; Worcester spread the ball wide to score in the left corner. 0-5

On the half hour Richmond took a quick penalty and caught the defence off-guard for Emelie Hellgren to score. 7-5 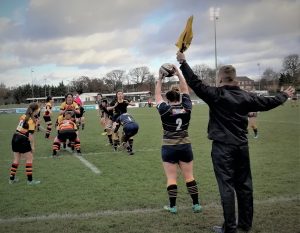 Lark Davies with the throw (Photo: B Perkins)

If the referee had been less generous, Richmond might have played out over half the game with 14 on the field. A decisive break down the right wing by Vicky Foxwell and Josie Symonds saw a defender’s hand intercept the final pass. Fortunately for the home side, a yellow card was shown, not red.

Nonetheless, Valkyries finished the half on a high: a line-out catch-and-drive allowed Alex Callender to mark her debut with a try.

When Worcester added a third try from a great forward drive, you wondered whether they could overcome past disappointments and post a great victory. Then came the saga of the lost opportunity. If Laflin’s long burst had resulted in a notional score of 7-21, Richmond would have needed three scores to save the day.

As it was, they completed their fourth win of the season, and can be pleased with the resilience they showed against a resourceful opponent. 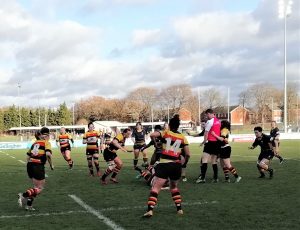 Ref gets in on the action (Photo: B Perkins)

The other Sunday result: Sarries 59 DMP 0

So a splash of big wins reappears. This weekend only the Richmond game ends with a margin of less than 34 points. This is a worrying trend: one underlying aim of the Tyrrells was to even standards up. At present the reverse is happening.