Normally you would expect these match-ups only in a World Cup. But such is the intense competition these days that the public can enjoy the sight of these four great nations battling for supremacy within 24 hours. And there are many other international contests going on all around the world.

France achieved one of their greatest triumphs, their first (official) victory over the Black Ferns in a palpitating contest in that cauldron known as the Stade des Alpes, Grenoble. For the ‘official’, you need to confer with France’s manager, Annick Heyraud. She has a story to tell. France’s only disappointment was that they couldn’t quite beat the world record attendance – only 17200 turned up, some 540 short of the record set there last season in the England clash. Still, that figure is nearly three times the English stand-alone record. Perhaps it goes to show the French prefer to see Perfidious Albion put to the sword.

This was a game of seven tries, but more significantly, four penalties. Penalties in the women’s game are the sure signal of high intensity, of close margins. The widest gap between the sides was France’s 10-point lead just after half-time, (24-14), through Caroline Drouin’s try. Inevitably the Ferns pulled back and that was where Drouin’s kicking skills paid off. She won her late penalty battle with Kendra Cocksedge 2-1. The whole of France held its breath as les Bleues clung to their 3-point advantage. A great triumph.

A sad note to finish: this was the last showing of two of the Black Ferns greatest, their long-term captain, Fiao’o Faamausili, and Linda Itunu.

The Red Roses now knew the size of the challenge that faces them to regain the 6 Nations trophy lost to France on that same Alpine ground. How would they fare against the Maple Leafs the next day? 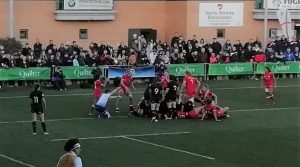 This was a sparkling Autumn day on a delightful ground with a large gathering to watch events.

The Canadians may have had six debutants on the roster (three starting), but there were enough familiar names in amongst to send a slight shiver down English spines. And what could it portend that all the starting backs came from French-speaking Québec? Their current tour of Europe represents the only internationals they will play in 2018. Their only other matches since the World Cup in August 2017 were the three against England a year ago. They go on to play Wales, then Scotland. As with the USA Select, they will play an additional match against the England Development side, to ensure everyone has meaningful game-time.

The English line-up in black – yes, black (aka ‘anthracite’), showed great strength up front, but less experience out behind: Millie Wood having to play on the wing and Lucy Attwood making her first start at outside centre. Zoe Harrison’s highly promising development at No 10 had been hampered by a longish break for injury.

This contest could scarcely have been more different from last week’s at Allianz Park. Now it was natural light (strong low sunshine), natural grass and a formidable opponent. Last year Sean Gallagher refereed England’s demolition of Scotland. Would he work his magic on the result again? Not if Cindy Nelles had anything to do with it: she picked up at the back of a scrum and drove our poor whistler straight over on his posterior. Laughter all round.

England established themselves from the kick-off. It took them ten minutes to produce their first unstoppable maul. Lark Davies resurfaced last, (5-0). Canada countered strongly, revealing a trace of rust in their game with the odd misjudged pass and catch. 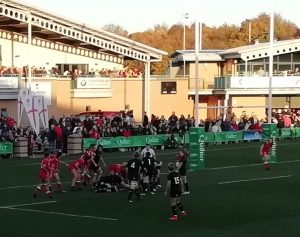 The crowd roared as Hannah Botterman set off on a 40-metre run through midfield, stepping past some opponents, knocking others over. Result: a penalty to the Roses and a few stars added to her name.

The pack repeated their rumble on the 20-minute mark, and Lark Davies achieved her second try of the day. (10-0) It’s hugely to her credit that she has borne the captaincy of the Valkyries during a period of famine for them with such positivity. A fluent move by the backs nearly added to the score, but a pass from McKenna to Smith was a fraction behind the target – she was stopped short.

Inside the half-hour, the pack took over again; this time Poppy Cleall claimed the honours. How to stop the driving maul is one of the burning questions among rugby thinkers. Fortunately for Canada, Mr Gallagher didn’t reach for his yellow card. It can be argued that it is too easily produced these days. Players bowled over backwards should be pitied rather than punished.

So now the home supporters could look forward to the Roses widening their game and toying with the opposition. False hope! It was the Maple Leafs who got their act together with some outstanding combined play to score an excellent try just on the 40-minute mark. Anaïs Holly angled a perfect chip to the line for Alex Tessier to claim the touchdown.

The worry for England was that Canada were now in the groove and scoring out wide, something that the home team had not managed. It is such a step up to international level that players have much less time to think on the ball: Zoe Harrison and Lucy Attwood are highly promising operators, but were caught in possession or forced into error a few times.

The first change of cast came on 20 minutes, Shaunagh Brown replacing Botterman. A moment before Daley-Mclean came on to replace Harrison, O’Donnell just failed to force her way over in the left corner. Canada’s defence was at its typical best.

With KD-M masterminding events, England began to assert their authority. She opted several times for punts downfield just to ensure the game was played in enemy territory. But as England spread the ball wide to the right – disaster! Another interception. Alarie sprinted from close to her line into the clear. Who could stop her? Smith set off from the opposite wing and slowly but surely caught up. Alarie  showed her rugby antennae were working well; she feinted to slow and turn away; Smith hesitated and she resumed her assault to score a remarkable solo try. (15-12)

England regained their composure; Burford made a threatening run through the middle. The ball swung left for Smith to show her surprising strength and force her way over by the flagpole. (20-12)

Things got better when McKenna made another mazy run and England charged. This time it was Abbie Scott who claimed the score. Could the home crowd relax at last? (27-12)

Canada still weren’t quelled. With time running out, they mounted a final defiant thrust to score and convert.

Player of the Match: Lark Davies

Other results from the weekend: