Pentathlon GB’s 2014 World Champion and 2012 London Olympic silver medallist Samantha Murray has announced her retirement from modern pentathlon today. The 29-year-old, who also won World Championship bronze in 2012 and enjoyed a World Cup win in 2015, is one of Great Britain’s most successful modern pentathletes and will retire after nearly 10 years at the top of the sport. 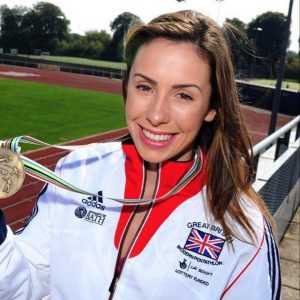 Murray, who grew up in Lancashire, first took up the sport at her local club Ribble Valley MPC. Hours of training and honing her skills, as well as competing in national competitions, saw an international debut arrive in 2006 with selection for that year’s Under 19 World Championships in Italy. From there, she moved to Pentathlon GB’s National Training Centre at the University of Bath in 2008 before bursting onto the senior international circuit two years later with 4th and 7th World Cup finishes as a 20-year-old.

Things would only get better for Murray with a stellar 2012 season seeing the Brit write her name into modern pentathlon folklore by winning medals at both the World Championships and Olympic Games. Her bronze at the World Championships in Rome, the final qualification event for the Games, secured a place on the Pentathlon GB team for London where she went one better by taking home a silver medal, Team GB’s final medal of their home Olympics.

Two years later, the crowning glory of Murray’s career arrived when she became World Champion in 2014 with success in Warsaw.

The Lancastrian has also won a plethora of team and relay medals, including Women’s Team Gold on home soil in Bath at the 2015 European Championships and Women’s Relay silver at the 2016 World Championships in Moscow, her final major international medal.

A second Olympic appearance in 2016 saw Murray finish 8th in Rio de Janeiro, the highest placed former medallist in the field before her final British title arrived in 2017.

Reflecting on her career Murray said “From a young age, it was my dream to compete at an Olympic Games and represent Great Britain. To have this opportunity to do so on two separate occasions, and bring home an Olympic medal in the process, is something I will cherish forever and for which I am eternally grateful.

“I’m so proud of what I’ve achieved in the sport especially my World Championship title. I hope that my achievements have left a legacy that will continue to inspire pentathletes of the future.”

Pentathlon GB Performance Director Jan Bartu added “Samantha is retiring as one of the most recognised and successful athletes in the sport. Her commitment, diligence, working culture and fighting spirits have become legendary over the years.

“It has been incredible journey, for me personally, overseeing Samantha’s progress through the Pentathlon GB Performance Pathway to absolute excellence. I also highly value her academic achievements and contributions to the society whenever time allowed.

“I would like to wish Samantha continues success in professional and personal life in the years to come. Thank you for all unforgettable moments of your athletic career.”

Everyone at Pentathlon GB and 4TLOS wish Sam all the best for her future.