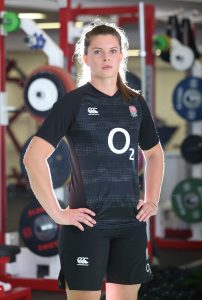 Saracens prop Ellena Perry starts at loosehead with Firwood Waterloo teenager Sarah Beckett at No.8 and in the backs, centres Tatyana Heard (Gloucester-Hartpury) and Carys Williams (Loughborough Lightning) start at 12 and 13 respectively.

With regular Red Roses captain Sarah Hunter on the bench for this opening game, Harlequins lock Abbie Scott is named to lead the side. Additionally from the bench, Wasps scrum-half Claudia Macdonald and Bristol Bears centre Lucy Attwood will be looking for their first international appearance.

Daley-Mclean, who earned her first England cap against Scotland in 2007, captained England to victory in the 2014 Women’s Rugby World Cup before going on to represent Team GB in the 2016 Rio Olympic Games.

Middleton said: “We know where we are and there’s a lot of excitement among the squad to start a new international season. We have new talent among the group who have developed their rugby through the pathway and Tyrrells Premier 15s and bring a mix of rugby backgrounds to the set up. It’s important to give players opportunities and there is a lot to play for.

“The USA are match ready from their game against the Black Ferns and will be hardened and wiser for last weekend. Like them, we are ready and expect a tough game on Friday.”

Marking Daley-Mclean’s milestone 100th cap, he added: “Katy is one of the greatest women’s players ever. It’s a remarkable achievement to get 100 caps for your country, especially considering she took time out in the sevens programme to represent Team GB in the Olympics.

“She has everything; an accomplished skillset, ability and a thorough understanding of the game. Katy is a great asset to England, a natural leader and an inspirational player. She knows how to inspire a team and is a great on-field motivator.”

Of the captaincy he said: “Abbie is a natural leader and a rugby smart player, she will do a great job.”

USA Women arrive in the UK having played the Black Ferns on Sunday, losing their first game since the 2017 Women’s Rugby World Cup semi-finals. They most recently played the Red Roses in Ireland last summer, with England coming out 47-26 winners in the opening pools.

Wasps FC Ladies wing Abby Dow has been ruled out of the three Tests through ankle injury, with Millie Wood (Gloucester-Hartpury) called in to the wider squad as replacement.