Wasps were beaten 24-8 in a fiercely fought contest against Harlequins. The hosts made the most of their chances before a strong finish by Wasps in front of a large crowd at the Twickenham Stoop. 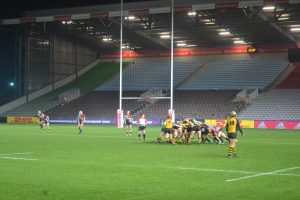 The game began as expected in a nervy affair, two penalties exchanged between the sides the only scores in the first 20 minutes. The Harlequins strong driving maul then proved devastating, as it resulted in two tries before half time.

After a penalty in midfield, Harlequins lineout provided a strong platform inside the Wasps 22m. The resulting maul drove Wasps back over the line with Davinia Catlin finishing the score. Despite the best efforts of Wasps defence in open play, it was another driving maul that saw the hosts extend their lead. With two minutes till half time, Davinia Catlin was on the end of another driving maul to give Harlequins a 17-3 lead at the break.

Harlequins started the second half with a long period of pressure inside the Wasps 22m. Despite the best efforts of the visitors, holding the ball up over the try line twice in quick succession, Fiona Fletcher scored under the posts at the base of a powerful scrum.

Wasps looked in the ascendancy in the latter stages of the game but were unable to convert, during a fragmented final 20 minutes which saw four yellow cards. Ellie Green and Emily Scott saw yellow for the hosts, while Lizzie Goulden and Claudia Macdonald were sent to the bin for Wasps.

The visitors finally crossed the whitewash with two minutes left on the clock. Wasps set up a good platform to attack from a strong scrum, the ball was spread wide quickly and Garnet Mackinder used her pace to beat the final defender and race in for the score.

Wasps looked competitive throughout but were starved of possession for large parts of the match. A strong defensive effort kept the hosts to three tries, despite sustained periods of pressure for Harlequins. The hosts set piece proved a real weapon, as it provided all three of their scores.