England’s Commonwealth Games gold-medal winning netball squad, the Vitality Roses, have tonight (01.11.18) been crowned the Team of the Year at the 2018 Sunday Times Sportswomen of the Year Awards. 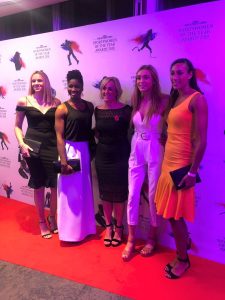 Sporting stars from across the country gathered at the awards ceremony in London to celebrate the achievements of inspirational female athletes and coaches.

The Vitality Roses’ nomination came as no surprise after they wrote their names into the nation’s sporting history and secured a last-second win over home favourites Australia at the Gold Coast in April 2018.

Following England’s dramatic win at the Commonwealth Games, the team jumped to second in the International Netball Federation’s world rankings – their highest position to date.

Voting for the Team of the Year Award, which recognises the achievements of Britain’s sporting teams, was opened up to the public to offer people the chance to support their sporting heroes in the lead up to the glamorous affair.

The Roses were up against the women’s British Wheelchair Basketball team, Chelsea Football Club and Team GB’s 4x100m relay team.

After being announced the winners of the Team of the Year Award, gold medalists Ama Agbeze, Helen Housby, Jo Harten and Geva Mentor took to the stage to collect the award on behalf of their fellow team mates, alongside their Head Coach Tracey Neville.

Tracey said: “Thank you to all who voted for the Vitality Roses and have supported us in our journey to winning Commonwealth Games gold. The players have been accountable to each other, both on and off the court, this win has inspired them to work harder, commit more and push on to achieve more as a team.”

England’s success at the Commonwealth Games has led to an ever-growing fan base for both netball and the Roses, which is evident from team’s win at the Sunday Times Sportswomen of the Year Awards.

According to a recent survey conducted by YouGov on behalf of England Netball, 130,700 women have started playing netball or playing more netball as a result of the Commonwealth Games gold medal.

The Vitality Roses will come together once again as a team, from 27 November to 2 December, to face the Uganda She Cranes in a dramatic three-match series in Liverpool and then London.

The England team will then face four of the world’s best netball teams in January in the Vitality Netball International Series, as part of the Netball Quad Series, for the last time before the Netball World Cup in July 2019.