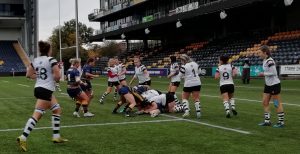 There was no sense of gloom and doom at Sixways as the Valkyries took on Bristol Bears in the search for a debut victory. It was a bitter day of north wind and freezing rain, fit for winter warmers.

Valkyries’ main problems lie in their defensive patterns. Bristol were able to make initial thrusts, then half-breaks, then full breaks, each of which let them advance too far for comfort. They produced some good combined attacks that might have led to more than their two tries. But as long as they are leaking territory so often, victory will remain elusive. 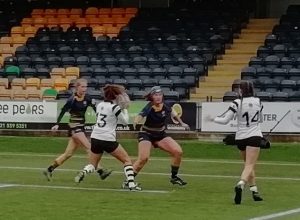 Bristol have so much strength in so many positions that we must wonder why they are not jostling for top position. Consider their midfield: two distinguished England centres absent injured (Amber Reed and Lagi Tuima), and they can turn to two outstanding prospects to replace them, Lucy Attwood, an U20 who can pop conversions over from the 5-metre line and scores a first-half hat-trick; and Phoebe Murray, the U20 captain on the unbeaten tour of North America two months ago. Add to them Elinor Snowsill, the experienced Wales No 10 (there’s a combination to conjure with!); she is playing at the height of her powers these days. Wales won’t want to hide her at No 15 this season.

Up front Sarah Bern may be out till January, but they can draft in Ellie Mulhearn from England’s U20 and she’s selected to join the Quilter squad.

The try of the opening half is scored by the babe of the team, the Cornish No 15, Merryn Doidge. 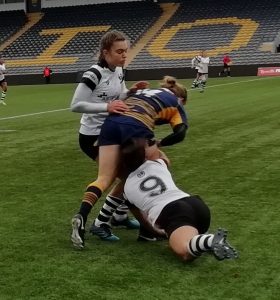 No way through for Lydia Thompson (Photo: B Perkins)

She skates away down the right wing, sells an an outrageous dummy with a reversed right hand and sails through untouched by human hand. If only the game were that simple!

By half-time Valkyries are 5-31 down. Lark Davies, the home skipper, has scored a fine try, but frailties elsewhere tell the story.

The Canadian, Mackenzie Carson, gets the scoreboard ticking over again as the Bears take charge. But the Valkyries aren’t done yet: the skipper finds herself in space out wide to double their total. The final minutes are marked with two further tries for the visitors, first to Murray then to Poppy Leitch. That brings up another unwelcome half-century on the Sixways board.

In the gap between Saturday and Sunday and between BST and GMT, Lightning go 9 points ahead of the chasers. Oxygen must be quite rare at that altitude.

Two matches were scheduled after a 24-hour delay, Richmond taking on Quins at 1 o’clock instead of enjoying a Sunday roast. They repeated the shock they gave Sarries in Round 4, going over early for a splendid try by Libby Povey from a quick tap penalty. But this rapture couldn’t continue. Quins, boosted by their triumph over the same Sarries last week, played with a pace and power that the hosts couldn’t match. 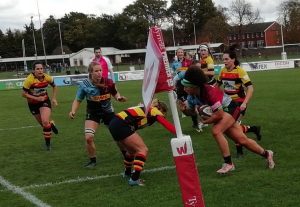 Shaunagh Brown on the rampage (Photo: B Perkins)

Shaunagh Brown was a towering presence, driving through non-existent gaps and gaining her team acres of territory. She scored their first try and helped Fi Fletcher to get another. Emily Scott and Beth Dainton added two more before Anna Caplice squeezed the hosts’ second try in just before the interval (10-26).

Richmond paid heavily for this onslaught, suffering several injuries as they tried to stem the tide. Like Worcester the day before, their defence was too easily breached for comfort. Ellie Green again proved the power and accuracy of her place-kicking (3 from 4), despite the bracing cross-breeze.

Richmond’s biggest achievement after the break was to keep the score motionless for a long period, but the pressure on the scrum finally told when the referee awarded a penalty try. In the last quarter Quins had to defend hard, but Richmond weren’t able to keep their accuracy right through to the try-line. Almost inevitably, the visitors had the last word, Chloe Butler finding a way through to the whitewash. 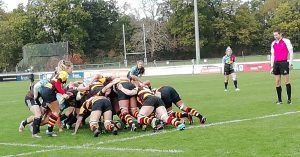 Up at Allianz Park, Sarries knew they had to get the show on the road again after the upset against Quins last week. Gloucester-Hartpury did well to chalk up 24 points against them – the total Sarries had conceded in the first four rounds. But the home fires were burning bright, helped by another outstanding performance by Sarah McKenna with hand and foot.