Wasps secured a bonus point victory over Richmond in front of a huge crowd at the Ricoh Arena. Celebrating Wasps Heritage Day, Wasps enjoyed a 31-15 win in a double header, following the men’s Champions Cup clash with Bath. 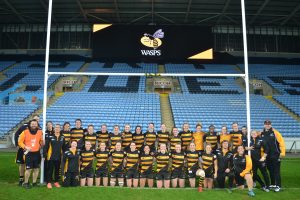 Liz Crake was the star of the show for the black and gold crossing the whitewash for three of Wasps five tries. There was also a fantastic solo effort from winger Tova Derk.

Wasps started the brighter of the two sides. After a direct attack from the forwards, Claudia Macdonald sniped over from close range. Richmond hit back with a penalty shortly afterwards.

Wasps second try came just before the half. After a long time camped on the Richmond line, Liz Crake finally powered over in the corner. An excellent touchline conversion gave Wasps a 14-3 lead at the break.

Tova Derk got the first score after the break with an electric 40m break through a scrambling Richmond defence, capped off with a fantastic finish in the corner. 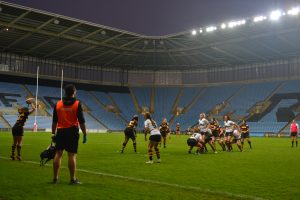 Richmond and Wasps exchanged scores, with Grace Moore crossing for the visitors and Liz Crake scoring from the base of a ruck for the black and gold.

The visitors refused to lie down as they secured the next score. Despite some heroic Wasps defence, Richmond continued to attack and Jess Wooden scored in the corner.

Wasps picked up the final score of the game. A strong set piece provided an excellent platform as Liz Crake scored her third of the day. Another touchline conversion saw a 31-15 final score.

The victory, in front of an electric crowd, sees Wasps pick up their fourth win of the season. They will hope to keep that momentum as they travel to Darlington Mowden Park Sharks next week.