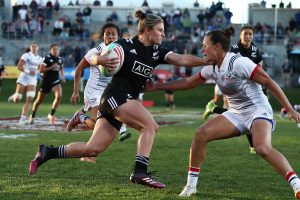 Michaela Blyde (New Zealand)The youngest nominee at only 22, Michaela Blyde is in contention to win the award for the second year running after another impressive season with the Black Ferns Sevens that saw her named in the HSBC Dream Teams for both the series and RWC Sevens. The DHL Impact Player of the Series for a second time in 2018, Blyde scored 37 tries across the five rounds – second only to team-mate Woodman – as New Zealand finished as runners-up after winning the Kitakyushu, Langford and Paris rounds. Blyde, blessed with electric pace and quick feet, scored another nine to help New Zealand claim back-to-back RWC Sevens titles in San Francisco, including a hat-trick in the final against France. The season also saw her win an historic gold medal at the Commonwealth Games. 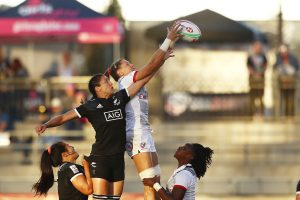 Sarah Goss (New Zealand)The inspirational captain of the Black Ferns Sevens for the last four years, Sarah Goss led her side to an historic gold medal at the Commonwealth Games in April, tournament victories in Kitakyushu, Langford and Paris and a successful defence of the RWC Sevens crown in a run of 27 consecutive wins. The 25-year-old, who started every match in the 2018 series, has a tireless work ethic which, combined with her dogged defence and vision, enables her to unlock defences for herself and her team-mates. Goss was named in the HSBC Dream Team for RWC Sevens in San Francisco after also receiving the UL Mark of Excellence as the best player in the tournament. 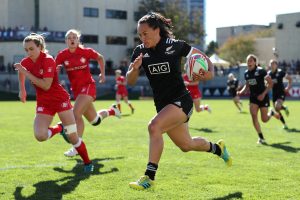 Portia Woodman (New Zealand)The only player to be named World Rugby Women’s Player of the Year in both sevens (2015) and 15s (2017), Portia Woodman was at her devastating best in the 2018 series to finish as both the top try scorer and point scorer with 43 and 215 respectively across the five events. The former netballer may have moved into the forwards in sevens, but with her blistering pace, unbelievable footwork and power she remains a threat from anywhere on the pitch, leaving others in her wake to score herself or create opportunities for her team-mates. The 27-year-old’s displays inevitably earned her a place in the HSBC Dream Team for both the series and RWC Sevens.