It was a nice coincidence. A few hours after the top four teams in New Zealand played off in the finals of the Farah Palmer Cup and Championship, the two finalists in last season’s final of the fledgling Tyrrells Premier League took up stations at the Stoop. Saracens were defending a perfect record with the most miserly defence against a Quins side determined to knock them off their perch.

This turned into one of the most dramatic contests of the season thus far. After the memorable drawn finish to the Quins-Bristol game, the Stoop is acquiring notoriety as the place to avoid for the weak-hearted.

The conditions were perfect. Sarries repeated their (relative) failings of recent matches, unable to establish themselves early. Fortunately for them, Quins were penalised close to their line and the ball was cleared. The visitors’ first advance came through a surging run up the middle by their highly promising Norfolk winger, Georgie Lingham. But as so often happened through the game, the defence held firm. Quins countered at once and won an offside decision close enough for Ellie Green to pop the kick over. (3-0)

The lead lasted eight minutes. Then a line-out drive allowed Hannah Botterman to cross and Lauren Cattell (operating at No 10 today) to convert. When Sarries spread the ball wide Cara Wardle ran well to touch down on the right wing. Was this the beginning of the end for Quins? (3-12) Two tries, and Sarries must have felt they were putting the opposition where they wanted them. But no; Quins achieved what few sides have done against the reigning champions: they drove and drove for Tova Viksten to collapse over the line and Ellie Green to ensure the goal.

Tradition dictated that Saracens would now walk away with a hard-driving victory. Sure enough, Marlie Packer completed a line-out drive, but Cattell’s conversion pinged back of a post. (10-17) 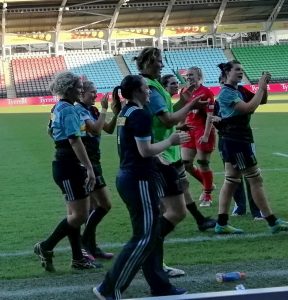 Against expectations that conventional sequence of events went awry. Sarries couldn’t put their foot down to prevent the opposition from reviving. After narrowly missing with a penalty, Ellie Green calmly stroked another chance over. (13-17) Then Heather Cowell covered herself in glory by streaking away to score and put the hosts in front. Green showed her remarkable kicking skills by sending the ball over from a wide angle. (20-17)

It was fascinating watching Sarries operate under these unfamiliar conditions, having to play catch-up. In a word, they failed. Indeed most of the last thirteen minutes were played out close to their own line, as Quins showed huge heart and skill to ensure their lead stayed firm. The crowd roared them on. The drama was palpable.

While the try-scorers normally claim the headlines, a major hero today was Ellie Green whose place-kicking was central to the home victory.

Elsewhere: Lightning seized their chance to go top with an unbeaten run of 6 games. The four basement clubs all went down, three of them decisively. I’ll pass comment on the strengths and weaknesses of the league when we come to half-way through the season, that is, half-way through the 3-year run of its no-promotion/no-relegation laid down by the Tyrrells regulations.

And the Kiwi results? In the Championship Wellington beat Otago 57-5! Admittedly they were given home advantage by the competition rules, but the gap between best and second best makes a striking contrast with the game played out at Twickenham Stoop.

The Table after 6 rounds: