Hinch made her international debut as a 19-year-old back in 2008, and has made a total of 133 appearances for England and Great Britain since then. 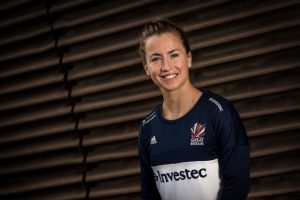 Since 2012 she has played in fifteen consecutive major international hockey events; winning gold at the Olympic games and European Championships, with further medal success at two Commonwealth Games.

Maddie said, “After a very intensive few years I feel the need to press the pause button on playing international hockey and take a break.

“I plan to take this time to recharge both physically and mentally, work on my game technically with Stichtsche HC and return in the best possible position for my teammates, the programme and my country.

“Hockey is in an amazing place in this country, as highlighted by this summer’s world cup, and it has been such a whirlwind since gold in Rio. I will of course be following the team’s results closely and it will be very unusual for me watching from afar!

“I still very much have the goal of going to Tokyo 2020 with Team GB, if selected.”

Performance Director Ed Barney added, “We fully respect Maddie’s position and always look to support our athletes in the choices they feel are right for the team and them individually.

“Maddie believes her personal development is best served with a break from the international programme, and we will be in regular dialogue with her in the coming months.

“In the meantime this represents an excellent opportunity for our other goalkeepers to further develop their skillsets, and I look forward to them grasping the chance with both hands.”