Olympique Lyonnais star and Netherlands International Shanice van de Sanden has spoken candidly about the importance of self-expression, as part of the intimate new documentary series Strong Is… produced by UEFA’s Together #WePlayStrong campaign. 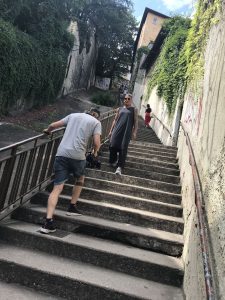 Olympique Lyonnais star Shanice, who’s also well known for her unique style and iconic red lipstick, has a distinctive fashion sense and a confidence on the pitch that’s emulated in her style and sense of self.

The striker, who played a vital part in Olympique Lyonnais’ UEFA Women’s Champions League Final win this year in Kyiv, believes it’s important to remember that everyone is different and encourages her fans to always be themselves.

Strong Is…Shanice van de Sanden focuses on her personal style and self-expression and looks at the mental and emotional strength she has learned in order to be confident in who she is as an individual and as a world-class athlete.

Shanice van de Sanden said: “There are a thousand, million people on this earth but there’s no one like you and you have to remember that every day when you stand in front of the mirror.”

“My fashion is really important to me, because it’s just how I am. I like to be a little bit different from other people, so I like to stand out. You have to be strong and be happy with who you are. And if people want to say something about it that’s their problem.

“I’m really proud to be a part of the ‘Strong Is…’ series as part of Together #WePlayStrong. I believe that being me, being strong and being who I am will be the key to my success.”

Peter Willems, Head of Marketing and Sponsorship Activities at UEFA, said: “Our Strong Is… series is an integral part of the wider Together #WePlayStrong campaign, and is a platform for us to send an important message to young girls across Europe.

“It’s important for us to demonstrate that strength comes in many forms, and we are grateful to the three players who have worked with us to tell their stories of strength and resilience.

“Shanice is not only a world class player but a role model for young girls, and it is our hope that her inspiring story will inspire the next generation of footballers.”

Strong Is… Shanice van de Sanden is the third and final film released by Together #WePlayStrong as part of the Strong Is… initiative, with the first two films profiling Wolfsburg player and Sweden International Nilla Fischer, and Chelsea and England International player Fran Kirby. All films cover real-life topics including sexuality, mental health, bullying and gender equality in football.