The next wave of England Rugby’s Inner Warrior campaign has launched today, after a successful series of Warrior Camps in 2017 and 2018 gave a huge boost to grassroots women’s rugby participation. The upcoming wave of Warrior Camps kicks off on 31st August and will run until 16th September with over 100 rugby taster sessions taking place at clubs across the country. 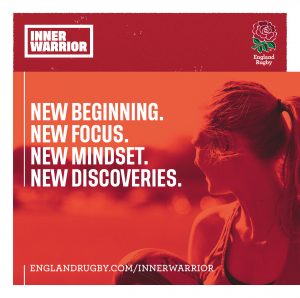 With the end of summer on the horizon and the new school year beginning soon, the Inner Warrior campaign is returning to provide women with a new challenge.

Having announced earlier this year that there are now 30,000 registered female rugby players playing regularly, the Inner Warrior campaign is encouraging new women to get active outdoors this autumn and express themselves and their inner strength through rugby.

England international, Katy Daley-Mclean commented, “Rugby is incredibly inclusive and encourages women from all backgrounds and physical statures to come together and bond through the sport. One of the best aspects of rugby is the variety of people you meet through the sport; the different characters and backgrounds of different players fosters a fun and sociable atmosphere which helps to strengthen the bonds between yourself and your teammates.”

Since its initial launch, over 15,000 women have attended Warrior Camps nationwide; and of those women, around 5,000 had never picked up a rugby ball before. The number of camps available to women has continued to grow to meet demand and the influx of players has seen a significant number of new female rugby club teams established.

Steve Grainger, RFU Rugby Development Director, said: “Female participation in rugby has seen unparalleled levels of growth in recent years, and is one of the fastest growing team sports for women in England.”

“As part of the 2017-21 funding agreement with Sport England and our Women and Girls’ Action Plan, the RFU is looking to significantly expand the number of women and girls participating in grassroots rugby across England, and the Warrior Camps are instrumental in supporting this growth.”

The Inner Warrior campaign aims to encourage more women and girls to play contact rugby, teaching participant’s key introductory skills and drills for rugby within a non-committal, social and fun environment. For 37-year-old, mother of three Vicki Greensmith, discovering rugby has been a life-changer. Discussing how she got into the sport, Vicki says: “The turning point for me was when my two girls started playing rugby, they absolutely loved it. I was going along to watch them all the time and noticed that there were quite a lot of girls who were playing up until U18s but then didn’t have a women’s team to go in to.

“So, when a group of women started running these sessions I was convinced to go along.

“Most of us have never played before but we just love it. I wish I’d found the sport when I was younger because there’s a social aspect to it that I’ve never found with any other sport, I’ve found loads of friends of all different shapes and sizes who will be friends for life now.”

Click HERE to find a Warrior Camp near you.

Courtesy of the England Rugby