Team Bath Netball’s U21 squad narrowly missed out on winning gold at the 2018 NPL Tournament after an outstanding final against Manchester Thunder.

The Blue and Gold, skippered by England U19 captain Chartie Curtis and featuring a host of Vitality Superleague players and rising stars, were in fantastic form throughout the four-day competition at the University of Nottingham. 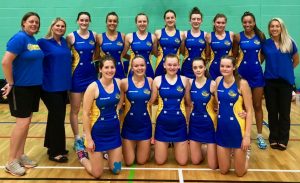 They topped their group after beating Loughborough Lightning 56-41, Surrey Storm 54-50 and Thunder 46-45 in a high-quality match that previewed what was to come in the final.

A stunning 84-40 semi-final victory over Wasps put Team Bath into the trophy match and they made the stronger start, opening up a seven-goal lead before Thunder fought back to hold a 26-25 advantage at half-time.

They stretched their lead to five goals at the end of the third quarter but a pulsating match swung back in Team Bath’s favour as they pulled level at 41-41 before edging ahead once again.

Thunder proved clinical in the closing stages, though, and managed to get their noses in front once more before holding on for a 51-48 victory. 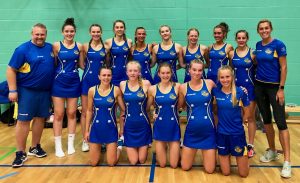 “It always hurts to lose a final but the players can be proud that they beat the eventual winners during the competition and have really put Team Bath youth on the map, inspiring a generation coming through our Futures Academy,” said Team Bath Netball Head Coach Thirlby.

“It is the first time a Team Bath age-group team has made the final at a NPL tournament and the more finals we can make, the greater our chance of winning them will be so we just need to keep working hard to give as many of our teams those opportunities.

“The players were impressive throughout. The one-goal win against Thunder in the pool games was just the type of experience you want them to go through and we were very clinical in the semi-final against Wasps, who finished third overall.

“Being without Paige after the group stages was a big loss to the team. Her contribution, skill and creativity on the court and character off it are hugely valued and we all wish her a speedy recovery.”

Team Bath’s U17s finished sixth overall in their 11-team tournament, which was also won by Thunder. The Blue and Gold recorded three victories in the group stages – beating Wasps 37-19, Team Northumbria 31-29 after overturning an eight-goal deficit and Yorkshire 33-28 – before narrowly missing out on the top-two finish they needed to secure a semi-final spot when they were edged out 29-27 by Wales.

Team Bath’s U19s were handed a difficult group draw in their tournament but they showed great spirit throughout before deservedly ending the week on a high note as they beat Team Northumbria 54-30 to place ninth overall.

“I’m so proud of how all the teams represented the Blue and Gold and very encouraged by some collective and individual performances across all age groups,” Thirlby said.

“It was impressive to see how quickly the U17s learnt from their narrow losses on day one to secure three wins in their remaining pool games, it bodes well for the future.

“The U19s were relentless in their pursuit of meeting their goals and despite falling just shy of a win in their early matches, they showed a resilience and intensity that we are very proud of.”

All of the squads were supported by physio Rhianon Stidever and performance analyst Pippa Baldrey during the tournament.

“I would like to acknowledge all the staff, coaches, players and parents whose commitment is unwavering,” said Thirlby. “To be part of such a professional team was a pleasure.”

Academy Head Coach Rideout added: “It was such an exciting tournament and an amazing opportunity for the different age groups to come together as a club.

“It was great to see the younger players looking up to the U21s and there was so much support from each team. I am looking forward to building on what’s been learnt and implementing it next season.”

Many of the players across the three age groups are developing their talent on the Team Bath Netball Futures Pathway, which provides access to top-quality coaching in Academies and Hubs across the South West of England. It is sponsored by Soldi, a privately-owned construction and development company that operates nationally from its head office in Radstock, Somerset.