A late drag-flick from Giselle Ansley guided England to a 1-0 win over Ireland to secure a their place in the knockout stages of the Vitality Hockey Women’s World Cup. 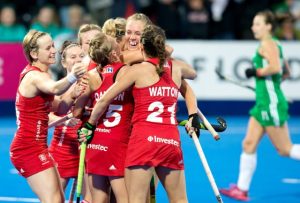 England dominated from the off but couldn’t make the breakthrough roared on by another sell-out crowd of 10,000 at the Lee Valley Hockey and Tennis Centre.

Next England take on Korea in the crossover match on Tuesday 31 July with the winner taking on the Netherlands in the quarter-finals on Thursday 2 August.

Speaking after the game head coach Danny Kerry said: “We played well today and were dominant, so it’s not so much the result but the level of performance which is really pleasing.”

Goalscorer Giselle Ansley said: “Obviously we are absolutely delighted and this means we are unbeaten in the pool. To get the win today and give ourselves that momentum going into the knockouts is absolutely huge.”