Here is a round up of the first Round of the Kia Super League 2018: 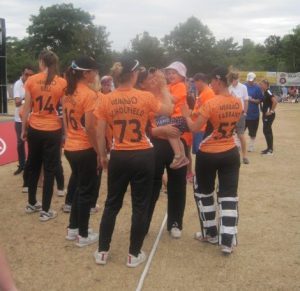 Amid a modest blare of trumpets the third and potentially last season on the Kia got under way  at Southport, Taunton and Guildford. Attempts had been made to even up the playing strength of the six teams, but initial impressions of imbalance were confirmed when the two northern sides, Lancashire Thunder and Yorkshire Diamonds, both went down with something to spare in the first round.

At Guildford, the dark green square stood out like an Old World oasis in a parched desert of yellow. On show was a galaxy of sporting talent: the English favourites: Nat Sciver (C), Sarah Taylor and Laura Marsh for the Stars; Tammy Beaumont, Danni Wyatt and Arran Brindle (a delightful surprise!) for the visitors; then incoming stars including Lizelle Lee, Mignon de Preez, Dane van Niekerk, Marizanne Kapp, Suzie Bates and Amelia Kerr.

Both sides suffered worrying starts. Tash Farrant saw off Lee (0) in the first over, then Kerr forced an lofted shot by Bryony Smith straight after. 0-2! When Farrant castled Taylor (6) in her second over, she reminded England selectors of her quality. Fi Morris dismissed Sciver (2) to leave the hosts looking down the barrel (18-4)  .

Van Niekerk (31) and Sophia Dunkley (66) came charging to the rescue. Dunkley was one of several promising home-grown youngsters hoping to make an impression. Hers was of the first order, a determined, hard-hitting innings that was the main reason her side finished on 141-9.

Would a run-rate of 7.05 be enough? The outfield, though uneven, was lightning fast. Bowlers and fielders would need to combine at their very best to give the hosts the points. The second innings began nearly as dramatically as the first: Both Wyatt (6) and Bates (9) were sent on their way within four overs.

But there the ways parted. Beaumont (62*) and du Preez (48), possibly the two smallest players on the field, showed their outstanding skills in striking 99 runs in 11 overs. The power of their hitting was matched by their stroke-selection and their running between the wickets. When they were parted – needless to say, it was due to a Taylor stumping – only 22 runs were needed from 5.1 overs. Beaumont polished them off in short order.

Elsewhere, Western Storm saw off the Yorkshire Diamonds at Taunton. Mark Robinson wanted to see his English girls deciding games, not the honoured imports. Well, Beth Mooney, Chamari Athapaththu and Rachel Priest mustered three runs between them. In sharp contrast, England’s captain scored a match-winning knock of 96. She has been in outstanding form in recent weeks.

The only major disappointment occurred at Southport. Lancashire Thunder were rolled over for an underwhelming 72. Nicole Bolton, one of the rare Aussies in this year’s set-up, lasted one ball. Sophie Devine, the cause of her downfall, became the only Loughborough  Lightning bowlers to go for over five runs per over. Her team-mates, Jenny Gunn, Lucy Higham, Linsey Smith and Kirstie Gordon all took wickets at minimal expense. 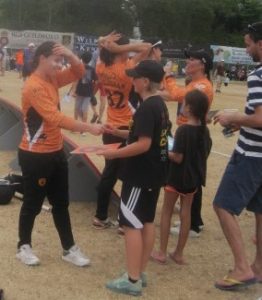 Tammy Beaumont greets a queue of autograph hunters after the match.

Not even four England bowlers, Kate Cross, Alex Hartley, Danni Hazell and Sophie Ecclestone, could hope to overcome these batting failures, though Cross returned figures (3-1-4-1) that will be noticed in high places.

Initial impressions left observers wondering why the ECB was contemplating tinkering with this competition. If it ain’t broke.. Charlotte Edwards has spoken loudly in favour of the 100-ball idea, but she was wise to point out its severe drawbacks. A few hundreds of spectators at Guildford left the ground full of praise for the quality of the cricket they had seen and the willingness of the players to engage with their adoring public – especially the very young – afterwards.