Wakefield Trinity Ladies bounced back to winning ways in emphatic style as they unleashed a backlash on Widnes Vikings at the Mobile Rocket Stadium as 16 year old fullback Amy Brinkley registered a hat trick of tries to remain unbeaten in the Women’s Championship.

Still hurting after last weeks defeat to the hands of Leeds Rhinos the Trinity Ladies prepared well throughout the week to ensure that they delivered a performance for their outing on the Belle Vue turf.

The newly formed Widnes Vikings team who were also reeling from defeat to Super League opposition last time out in the Challenge cup started brightly in the tough energy sapping conditions but the gulf in experience soon told. 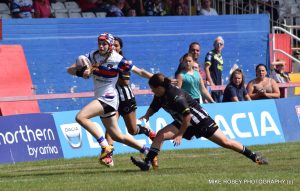 15 minutes in Trinity punished Widnes for a handling error in their own half as Lisa Taylor took the first carry from the resulting scrum taking on the line to give her side an overlap before dummying her winger and beating the full back to open the scoring.

That try seemed to open the flood gates as Widnes struggled to keep up with the pace of Wakefields attack. Fullback Amy Brinkley marauding run setup the field position and quick play of the ball for prop Jordan Catling to burst onto Kelsey Armistead pass to crash over with several defenders in tow, Nic Austin-Dyson added the first of her three first half conversions.

Widnes had the next opportunity getting close to cross the whitewash but resolute defense from Reynard and Austin-Dyson bundled Nina Martin into touch. 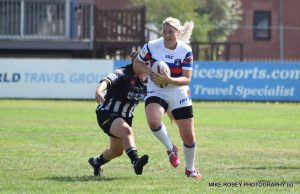 Despite the hot conditions Wakefield kept up the pace and were rewarded with 2 quickfire tries from acting half to go into a commanding 22-0 lead, the first from Michaela Reith who scooted over after a Jessie Matthews break and the next from similar position for Kelsey Armistead after Lisa Taylor went over 50 meters with a barnstorming break.

Taylor was also involved with the last try of the half with a break before Brinkley took on the line and stepped the cover defence to go over outwide and take a 26-0 lead into the interval.

A sizable crowd enjoyed the scorching weather and red-hot rugby on display from the hosts and Trinity continued with their dominance as Kelly-Marie Hall latched onto Hannah Watts initial break. Lisa Taylor soon went in for her second try of the afternoon as Dani Rose broke down the touch side before winning a penalty as Widnes tried to slow down the play of the ball so the visiting defense could set up their defensive line, Taylor took the tap 20 meters out and powered over. 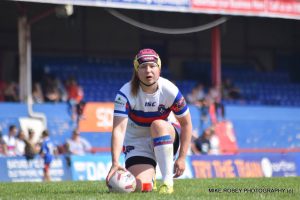 Fullback Amy Brinkley gave the fans plenty to cheer about in the next try and the full back defused the last tickle Widnes kick before racing to the 20 meter for a quick tap but the match official pulled her back for tapping off the mark. That didn’t stop Brinkley who returned to retake the tap before heading towards space on the touchline and go 80 meters rounding the fullback to go under the sticks. Lisa Taylor taking charge of kicking duties adding the extras to bring up the forty.

Hannah Watt was next to cross hitting a superb line supplied by Beci Brierley, Taylor again adding the conversion. There was just enough time for Amy Brinkley to finish off a sublime afternoon performance with her hat trick try from long range. From 10 meters from her own line the fullback raced the length of the field again finding space down the flank and evading the tired efforts of Widnes, Taylor again improving the try to round up a comprehensive 52-0 victory.

The win see’s Wakefield stay at the top of the table unbeaten with 5 wins from 5 but next up will be a much tougher fixture as they travel to Oulton Raidettes who sit just 2 points behind Trinity in second. The game kicks off at 2pm on Sunday 17th at Raider Park.