Manisha Tailor was awarded an MBE in the 2017 New Year’s Honours List for her services to football and diversity. 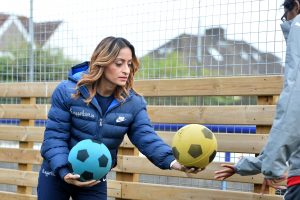 This award was recognition of Manisha’s hard work in the community through her website (Swaggarlicious) using the power of football and education to engage with diverse community groups and organisations, including women and girls, and adults with mental illness to lead a healthy lifestyle and develop life-long learning skills.

By profession Manisha is a qualified head-teacher, primary school trained with a Masters Degree, and more than 15 years of experience working in schools across the UK and Internationally.  She is also only one of 19 Asian women (based on FA historical data over 20 years) to hold the prestigious UEFA B Licence in Football Coaching.

Manisha began coaching in addition to her role as a full-time teacher in 2002 and worked across various boroughs in her 15 year teaching career, before qualifying as a head-teacher in 2011.  It was at that time she took the decision to step away from teaching and concentrate on a career in football and education using the power of sport to help her twin brother (who sadly suffers from severe depression) and the wider community, to raise awareness of social inclusion and mental health.  She took this step after the realisation that football was the great connection between herself and her beloved brother, after he looked at all her football gear and uttered the words “Football Manisha football”. 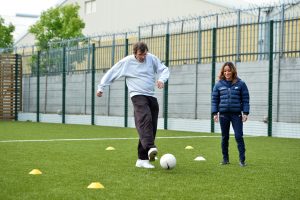 Manisha Tailor during a Coaching Session at Wingate and Finchley FC, London.Photo: Kate Green for FA

Manisha said: “As a teacher and coach I have an incredible power and that is the power to INFLUENCE.  To be in a position to positively impact the lives of others and re-shape the face of FOOTBALL is both EXCITING and INCREDIBLE.  Always remain true to your MORALS, VALUES and BELIEFS.  My twin brother is my INSPIRATION, but football is my HOPE and STRENGTH.”

Manisha works as an Academy Coach at QPR with the U9s team.  Chris Ramsey (former professional footballer and now Head of Coaching at the Academy) invited Manisha to do some part time coaching as a volunteer with QPR.  After a few months she was offered the role with the U9s which she has enjoyed for the last two years. 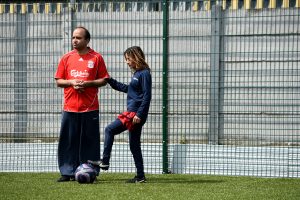 Manisha said that QPR embraces diversity and inclusion.  She also credits Chris Ramsey with helping her grow and learn as a coach.  The role has taught her a lot about both player and child development and how to help individual players achieve their potential as well as the team as a whole.

Obviously mental health education is an issue close to Manisha’s heart and through Swaggarlicious she has developed a football education programme which runs in partnership with Wingate and Finchley FC.  The weekly sessions offer a safe space for participants to make friends, have fun and develop football and communication skills. 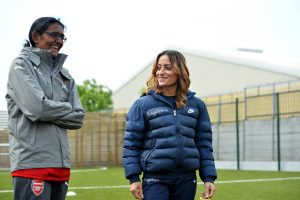 Over the last few years, Manisha’s work with Swaggarlicious has seen her win accolades for contribution to community and sport.  As well as her MBE, she was honoured with the Women in Football Award in 2013 at The Asian Football Awards;  in 2015 she received the Trevor Hutton Community Shield for her work with Girls in Football at St Gregory’s College, NW London and in  2016 Manisha was merited with an honoury award for Sport and Community with ‘Life Effects’ as well as winning ‘Rising Star in Sport’ with WeAreTheCity.

Already having achieved an enormous amount despite her youth, I expect that the name Manisha Taylor will become more even familiar in the future.

We wish her well in all aspects of her career and do hope that she is able to continue to help her brother through their joint love of football.

As part of the FA’s Gameplan for Growth (a pledge to double participation of women and girls in football by 2020), they are promoting the achievements of women working in football.  This promotion will illustrate to other females the opportunities available not just to play but also to coach and even referee.