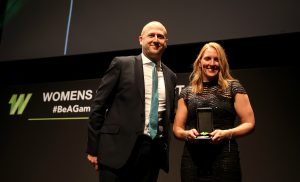 A range of individuals, organisations and initiatives were honoured at the event which took place last night at Troxy, East London.

The award for Individual Sporting Role Model which shines a light on an elite athlete who has used their influence to drive forward women’s sport was presented to footballer turned professional boxer Stacey Copeland. As one of one of only six professional female boxers in the UK, she is passionate about both challenging inequality and celebrating success of women in sport.

Team Sporting Role Model was awarded to the World Cup winning England women’s cricket team. Their win, in front of a sell-out crowd and 1.1 million UK TV viewers, was a watershed moment for the sport, inspiring a whole new generation of players and fans. 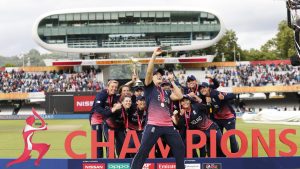 As well as recognising athletes and teams driving forward women’s sport, the #BeAGameChanger Awards also celebrates other individuals, organisations and initiatives that have had a significant impact. Categories include: Ambassador of Women’s Sport; National Governing Body of the Year; Brand / Sponsor Partnership of the Year; Inspiring Initiative – National and Local; Media Initiative of the Year; and Imagery of the Year.

Ambassador of Women’s Sport was awarded to double Olympian and Commonwealth gold and silver medallist and now the most senior black woman in athletics administration Lorna Boothe.

National Governing Body of the Year was awarded to the England and Wales Cricket Board (ECB). In 2017, the ECB made huge strides to make cricket a sport for all.

The Brand / Sponsor Partnership of the Year award which recognises the vital role of investment in raising the profile and increasing the impact of women’s sport was awarded to Investec’s partnership with GB and England Women’s Hockey.

The Inspiring Initiative categories recognises projects that have had a significant impact on progressing women’s sport at both a national and a local level. This year’s National Inspiring Initiative award was presented to England Rugby’s Inner Warrior campaign which aims to encourage more female players into rugby. 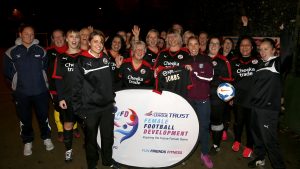 The Local Inspiring Initiative was presented to Crawley Old Girls (COGs) which aims to enable older women to learn to play football.

An award for Outstanding Contribution to Women’s Sport, chosen by Women’s Sport Trust, was presented to former England captain and founding member of the Rugby Football Union for Women Carol Isherwood.

Jo Bostock, Co-founder and Joint CEO of the Women’s Sport Trust commented “Why is the Women’s Sport Trust so committed to running the #BeAGameChanger Awards? Because compelling stories about the trailblazers need to be told. They set the pace and show what’s possible. Most importantly they stimulate other brands, sport and the media to step up and take action. Building this momentum will ensure the future of women’s sport.”

National Governing Body of the Year

Brand / Sponsor Partnership of the Year

Media Initiative of the Year

Imagery of the Year

Courtesy of the Women’s Sport Trust via We are Disrupt