University of Bath students won a fantastic 14 medals during a brilliant Bank Holiday Weekend at the BUCS Outdoor Athletics Championships in Bedford and the BUCS Rowing Regatta in Nottingham.

Sports Performance student Cameron Chalmers, supported by a Thompson Education Trust scholarship, won the fifth individual gold medal of his BUCS athletics career as he led a Blue and Gold one-two in the 400m.

Chalmers, coached by James Hillier and fresh from representing Guernsey at the Gold Coast 2018 Commonwealth Games, clocked 45.97 to take victory ahead of training partner Ben Claridge (46.69).

They then teamed up with Tim Stephens and Dominic Ringrose-Voase to win 4x400m relay gold in 3:11.35, surging through the field from sixth to successfully defend the title for Bath.

There were two Bath athletes on the podium in the women’s 200m too, where Beth Close took gold in 24.38 and Trendell Sporting Scholar Olivia Caesar won bronze in 24.66. Both are part of the student athletics squad coached by Colin Bovell.

United States international heptathlete Chari Hawkins, who is studying a Masters in International Education and Globalisation, demonstrated her all-round ability by winning medals in both track and field.

The Santander Sporting Scholar cleared 6.26m to win long jump gold on Sunday, then took 100m hurdles silver on Monday in 13.62. Georgia Silcox was fifth in both finals (5.80m and 14.22 respectively).

Valdo Szucs, who is also supported by a Santander scholarship, won 110m hurdles silver in 14.17 and Trendell Scholar Jenny Nesbitt, who represented Wales at the Commonwealth Games last month, won 5,000m bronze in 16:30.16. 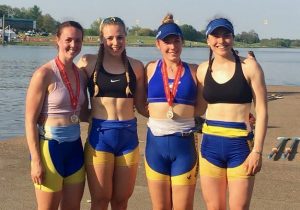 Both are members of the successful GB Rowing Team World Class Start programme at the University of Bath and joined forces to finish a fine fifth in the women’s championship double sculls in 7:38.65.

Bath eights also qualified for the championships finals in both the men’s lightweight and women’s open-weight competitions, placing sixth in 6:29.82 and 7:01.60 respectively.

For more information on combining study and sport at the University of Bath, visit www.teambath.com/student.