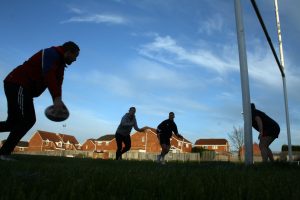 The former Trinity, Saints, Castleford and Huddersfield Giants player put the ladies through a master class of skills and strategy following their recent round 3 win over Stanningley. Mason has appeared in the film Skin Traffik alongside Mickey Rourke and Daryl Hannah and more recently in the TV series Peaky Blinders.

Fresh from them their Stanningley victory the former prop forward concentrated on technique rather fitness, but was keen to come back and put the Ladies through their paces not so soon after a game next time. 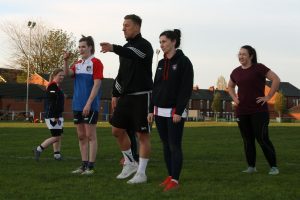 Mason said “I really enjoyed the session, I was invited down by captain Rebecca Brierley and I was pleasantly surprised. The skill and energy from the girls was amazing especially as it was only 24 hours after they played. I definitely want to come back down and do another session with them and put them through their paces.”

The Dewsbury born star passed on some golden nuggets from his 14 year career to the Trinity players concentrating on wrapping up the ball, running some set plays and scoring close to the line. 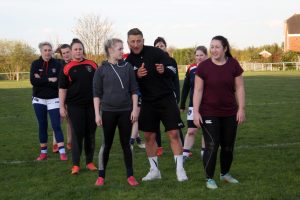 Head Coach Wayne Hirst who’s side is currently unbeaten in the Women’s Championship said “It was great to have Keith down to run a session for ladies, I think they got a lot out of it. They really applied themselves to the drills and I think they enjoyed something different after a tough pre-season. The mood in the camp is really positive at the moment both on and off the field.”

The Ladies team are enjoying good numbers at training and the squad has been bolstered with the signing of Danielle Swain. The former Bradford Bulls captain will add extra strike to an already formidable pack. The signing comes at a crucial time as Sundays’ victory at Stanningley came at cost. Prop forward Anita Godfrey had to leave the field with a knee ligament injury and will need to see specialists to assess the extent of the injury.

Hirst said “Its really unfortunate for Anita as she’s had a great start to the season, she’s been one of our most consistent performers and you can tell she’s really been enjoying her rugby. We’ll be keeping our fingers crossed that its too serious and that she can recover to her early form.”