The Wakefield Trinity ladies team remain unbeaten in their 2018 Women’s Championship campaign after coming from behind at half time to register a tough 22-8 victory over hosts Stanningley to make it 3 wins from 3. 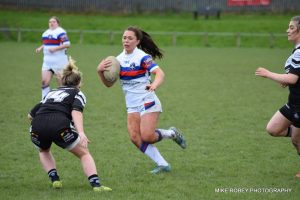 The opening exchanges were tough as both sides tested each others defence with play going from end to end. It was the hosts who managed to break that dead lock when prop forward Rachael Baker crashed over at the side of the posts to give her side a 4-0 lead.

Wakefield’s pack were dealt a blow when powerful prop forward Anita Godfrey had to come off with a knee injury.

It wasn’t until 8 minutes before the interval that Trinity managed to return parity and it came through scrum half Georgia Cutt who showed fleet of foot to get over the line after Rebecca Brierley short pass near the line.

The hosts regained the lead just before the half time as centre Allana Walker went through a gap to score outside, the conversion unsuccessful to take a slender 8-4 advantage at the break. 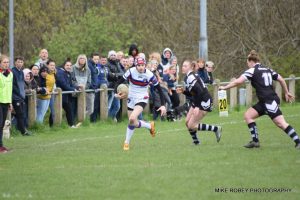 Changes were made at the interval by head coach Wayne Hirst and his side soon reaped the rewards as they took the lead for the first time of the afternoon. Winger Amy Brinkley continued to be dangerous with ball in hand and her step once again bamboozled the defense for her to cross. Second row Yasmin Copeland added the touchline conversion to put her side infront.

It was Copeland who spurred her team onto the eventual victory in a ‘Game Star’ performance adding a 2 self converted scores to see Wakefield home in the final stages of the game. The last of the efforts was undoubtedly the score of the game when several sets of slick hands saw Copeland link with centre Hannah Watt to cross the whitewash and seal the win. 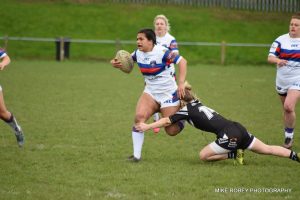 Head coach Wayne Hirst was pleased with his sides 2018 progress saying “3 wins from 3 is a great start to the campaign, I’m really happy with our start. It was a tougher day at the office on Sunday against a decent Stanningly outfit. We didn’t start the game like we spoke about and they came at us hard early on and we struggled to contain them.”

“We found ourselves behind at half time, I think we made a lot of unforced errors and we put pressure on ourselves in that first half and generally couldn’t complete our sets in the right areas of the field. We changed a few things up at half time and stayed positive and I was pleased with the character we showed to fight back to a comfortable victory in the end. “

“I’m pleased with our progress so far in the Women’s championship obviously we’ve made a good start winning our opening 3 games but there’s still improvement in us. We’re taking each game as it comes and if need be grinding out wins but I’m hoping with each game were developing as individuals but more importantly as the ladies get more game time together, as a team.” 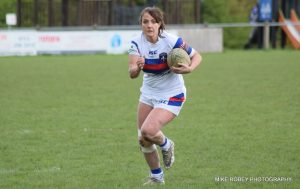 “With this weekends bank holidays the ladies game takes a break, Hirst continued ”We’ll be getting a bit of recovery into them with a light session and then I want to work on some areas I’ve picked up on in the first few games. We’ll then start looking at more game plan sessions when we start gearing up for Leigh Miners on May 13th.”

“It’ll be nice to be back at home against Leigh Miners, we’ve been on the road for two weeks now so it’ll be good to be play on the field we do our practice sessions at Sharlston Rovers. I’m hoping it’ll be a good turn out as its the first chance Trinity fans will have had the chance to see us live. Our first home game clashed with the men’s fixture, so with the Huddersfield Challenge Cup game being on the Friday night we’re hopeful it’ll be a bumper crowd.”