Nottingham Vets – an amateur five-a-side women’s football team – were turned into local heroes in the City of Nottingham. The squad were given the perfect sendoff ahead of their participation in the finals of The FA People’s Cup this weekend.

The team, made up of players between the ages of 35 and 60, formed this year to play football recreationally as a group of friends but have since found their way to the finals of The FA People’s Cup which will be held at St. George’s Park for the first time this weekend. 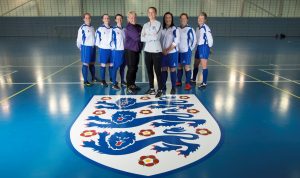 Taking place during Girls Football Week, the City got behind the team to celebrate their success in reaching The FA People’s Cup finals. Tributes included the emergence of a Nottingham Vets themed Café, a visit from the Lord Mayor of Nottingham and a good luck message from the City in the local paper.

To complete their day the team were whisked off to St. George’s Park, the home to England’s 28 national teams, for a surprise training session led by England Coach Casey Stoney, who has amassed over 100 caps for her country.

Speaking about the experience, Casey Stoney, said: “The FA People’s Cup is an extremely important competition providing an opportunity for all people to play football. And there is no better example of the positive impact it can have than the story of the Nottingham Vets, a group who, have fun, stay active and maintain friendships every week. The team can now look forward to a very special day out at St. George’s Park this weekend. It was a pleasure to meet such an inspirational group and I hope they can continue to motivate females of all ages around the country to give football a try”.

Danielle Pritchard, the founder of Nottingham Vets said: “This experience has been another example of why football is so special, regardless of age, gender or ability. From seeing our pictures on the wall in our local café to having a kick-about with Casey Stoney, the day is one that myself and the team will never forget. We are now looking forward to the finals and hope that we can make Nottingham proud”.

The FA People’s Cup is the nation’s largest and most inclusive small sided football competition which has seen over 6,500 teams enter across 18 categories this season. The competition, which launched in January, is open to players of all ages and abilities.

The Finals of The FA People’s Cup takes place this weekend and will be available to watch through the red button and on BBC Get Inspired. Simply visit https://www.bbc.co.uk/sport/get-inspired to follow all the action.