Wakefield Trinity Ladies backed up their season opening triumph last weekend with an emphatic 42-0 victory over Wigan St Patricks in the Women’s Championship.

Despite the heavy scoreline the game wasn’t always one way traffic as Trinity built their eventual accomplishment on a tenacious defensive attitude. 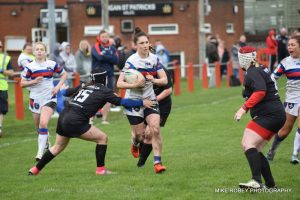 Head coach Wayne Hirst was pleased with his charges start to the game saying “We spoke before the game that we didn’t know too much about our opposition and that didn’t really matter as long as our defence was resilient. I thought we worked hard on that, we put them under a lot pressure when they had the ball and we forced some errors which allowed us the gain more possession.”

That possession built into points when second rower Claire Reynard opened the scoring to take a 4-0 lead. Trinity piled on the pressure and some strong carries from forwards Phillippa Lockhart, Anita Godfrey and Jordan Catling put Wakefield within striking distance. Hooker Kelsey Armistead spotting half a gap and backing her self to cross the whitewash, scrum half Austin-Dyson added the extras. 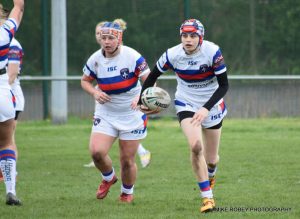 The hosts who were fielding several new debutants couldn’t hold the attacking prowess of Trinity with Georgia Cutt looking threatening everytime she carried the ball. The Red White and Blue enjoyed a purple patch on the half-hour mark and raced into a commanding 22-0 lead with 3 unconverted tries. The first a superb individual effort from full back Amy Brinkley who fielded a kick on her own line and after some deceptive footwork showed pace to race the length of the field. Winger Dani Rose and her centre Michala Reith also got onto the score sheet with some strong running out wide.

Despite the deteriorating conditions Clare Reynard completed a first half brace of tries with a score just before the interval to give her side a commanding 26-0 lead.

The second half saw St Pats offering a much sterner defence effort and paired with problematic handling conditions contained red hot Trinity to just 3 second half scores and it was only resolute defence of Wakefield via Rebecca Brierley, Claire Reynard and Yasmin Copeland that kept the hosts scoreless. 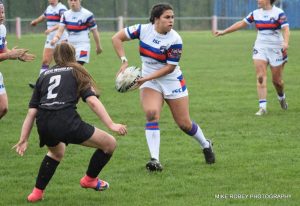 Full back Amy Brinkley went in for her second try of the afternoon to continue a great start to open age rugby in her second game for Wakefield. Georgie Cutt completed an all-round performance with a try which Austin-Dyson converted before the stand-off closed proceedings with a self converted try.

18 year old prop forward Jordan Catling was named game-star for the Wakefield Trinity Ladies with countless probing carries. A debut performance from new signing back rower Lisa Taylor also was a positive for the ladies.

Hirst said “I’m really pleased with the committed attitude the ladies put on show today. We scored some good tries but I’m most pleased with the nil. I thought we were excellent in defence today. We’ve started the season strongly but we’re not going to get too far ahead of ourselves. We’ve had some good numbers up training and with a 27 player squad they’re all pushing for a shirt each week. We’re starting to gel as a team and I’m excited for next week.”

Trinity will travel to last seasons Championship winners Stanningley in round 3 on Sunday 29th April. On the fixture Hirst said “This will be a good test of where we are in the league. Stanningley have been a capable outfit consistently and we have a few ladies who have played there so I’m sure they will be looking to put down a strong performance.”