Despite reports to the contrary in some media outlets, Wigan St Patricks Ladies retained the Active Workwear WRLA Challenge Cup in a classic ‘War of the Roses’ as the Premier Division side defeated the First Division Champions Dewsbury Moor Maroons, coming from behind to win 15-12 after leading 10-6 at half time.

In a classic final that saw the lead change five times, St Patricks second row forward Abby Latchford scored her sides decisive third try in the 64th minute but were made to battle on to the end and Rachel Porters drop goal in the closing seconds broke the Yorkshire sides hearts.

In front of 500 spectators St Patricks took an early lead when fullback Becky Greenfield went over for her side, but Charlotte Foley’s conversion hit the post.

The Maroons hit back a few minutes later to take the lead when Greenfield failed to take a Georgia Roche bomb and player of the match fullback Caitlin Beevers, drove through to collect the loose ball to score and also add the extras for a two point lead.

St Pats regained the lead again on 13 minutes which they took into half time as Greenfield redeemed herself with a great drive only to be stopped in her tracks by Beevers. From the next play though Foley crossed to make it 10-6.

Both sides gave it their all and on the hour mark the Maroons regained the lead when the influential Beevers made a 60 metre break before putting Roche over and the former added the extras to take a 12-10 lead.

St Patricks hit back immediately and centre Laura Richards had a try chalked off for a forward pass. The holders continued to press and regained a lead they were not to lose when Latchford stormed over in the corner.

St Pats clung on through steely defence and Porter’s one point was the final nail in the coffin against a gallant Maroons side. 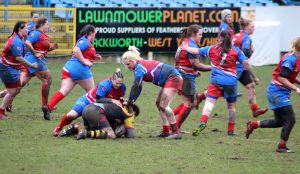 Premier Division side West Leeds Eagles are a new name on the Active Workwear WRLA Plate as club won its first piece of silverware in the clubs history defeating brave First Division side Odsal Sedbergh Sirens 36-4 after leading 20-0 at the break.

The Eagles soared to a three try 14-0 lead in the opening 12 minutes of the game and it looked like being a heavy defeat for the Sirens they showed their courage and pride scoring the opening try of the second half before a further three Eagles tries which saw Elizabeth Daniels complete her hat-trick and a double from player of the match Leah Jones. 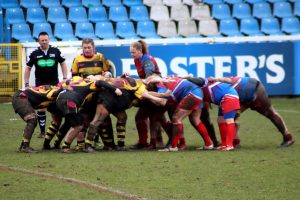 Jones scored her opener of the game after great handling and on six minutes Daniels opened her account which saw Zoe Brown convert the first of her four goals from seven attempts. The Eagles were in complete control as Daniels went in for her second, the third of the game.

Daniels thought she had completed a 20 minute treble by Sirens fullback Nicola Peat lifted the Sirens to greater commitment both in defence and ball in hand as an attacking force.

Late in the first half though the Eagles swooped again after a three player tackle saw them get the ball back in the last ten metres of the Sirens and Aimee Staveley went over for a six pointer.

The second half saw the Sirens playing down the famous Featherstone ‘slope’ and they started off the brighter scoring their only points of the game when Beth Greenwood drove her way over on 47 minutes, sadly Loren Gregory couldn’t add the extras. 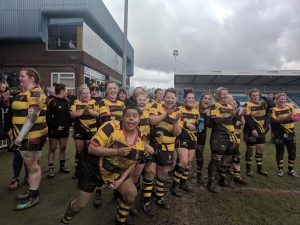 On the hour Brown went over for a six pointer and the Sirens showed their resolve to stop the expected point’s avalanche but in the closing minutes the now tired Sirens defence couldn’t stop Jones scintillating individual 70 metres try leaving a host of defenders trailing in her wake.