Loughborough University is pleased that Women’s Cricket Head Coach Salliann Briggs will take the next step in her cricket coaching career as Head Coach of Cricket Tasmania’s women’s teams. 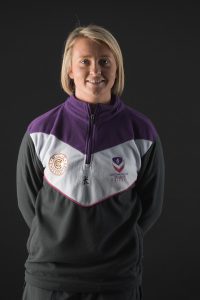 Although naturally disappointed to see her leave Loughborough, the University is delighted that Briggs is taking up a high profile role, having established and driven forward the women’s programme on campus.

As Head Coach down under Salliann will lead Tasmania’s WBBL side Hobart Hurricanes and WNCL team Tasmanian Roar, as well as harnessing the increased women’s participation at grassroots level.

Head Coach of Loughborough Lightning, who play in the Kia Super League (KSL), and Loughborough University MCCU Women’s Programme, Salliann established and drove forward the women’s cricket programme at Loughborough, leaving it in a better place than ever before.

Despite guiding Lightning to Finals Day in the inaugural KSL season, her biggest achievement will probably be as Head Coach to the England Women U19s, where she played a key role in the development of a large contingent of the current England senior team.

During her playing career Briggs amassed 114 one-dayers and 28 T20 matches for England, scoring more than 2,600 runs and making 34 catches. 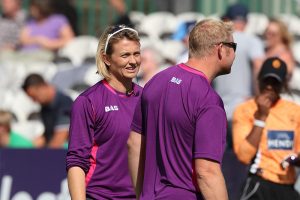 Commenting on her new role and her time in Loughborough Briggs said: “I’m delighted to be appointed as Head Coach of Cricket Tasmania’s women’s teams. I’m looking forward to bringing my knowledge and passion to both squads, alongside my experience with sport science and specialist coaching, to help these cricketers achieve their full potential.

“I’ve worked at Loughborough University for eight years and it has been a privilege to work alongside so many amazing colleagues and hardworking players, all of which have given me great guidance and support over the years. I will miss the people and the environment, but it’s time for a new challenge and for someone else to enjoy leading the MCCU and Lightning programme. I wish every player and all the staff within performance cricket all the best, and I will most definitely be supporting from afar.”

“Sall has huge passion for cricket and for the role women play in sport generally and we will miss her drive and passion immensely. We wish Salliann every success in her new role and will be watching her progress keenly from afar.”