The World Rugby Awards 2018, under the High Patronage of H.S.H. Princess Charlene of Monaco, will take place on 25 November at the Salle des Etoiles in Monte Carlo following a record-breaking debut in the Principality in 2017. 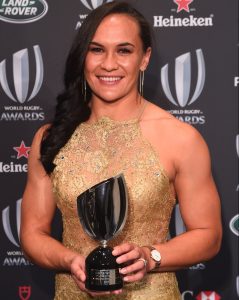 Fans are invited to assist in the selection of the prestigious World Rugby Men’s and Women’s 15s Player of the Year 2018 awards in association with Mastercard.

With social media a key forum for fans to engage with the sport, World Rugby is asking fans to assist the Awards Panel determine their shortlist by sharing their thoughts on Facebook, Instagram and Twitter using the #WorldRugbyAwards.

Fans and media will be able to have their say on players that have caught their eye in this year’s men’s and women’s Six Nations, the Americas Rugby Championship and Rugby Europe Championship between 16-23 March in the first of four dedicated international windows.

National team coaches and players will have two opportunities to cast their votes with these accounting for 30 per cent of the weighting in determining the World Rugby Men’s and Women’s 15s Players of the Year Awards in association with Mastercard.

The remaining 70 per cent sits with the star-studded World Rugby Awards panel, boasting five Rugby World Cup winners and 771 caps between them, who will cast their votes twice with nominees to be announced for the coveted awards in November.

The World Rugby Awards are the ultimate accolade for excellence in rugby on and off the field from community to elite level.

World Rugby Chairman Bill Beaumont said: “The World Rugby Men’s and Women’s 15s Player of the Year awards in association with Mastercard are the ultimate accolade of achievement. There is no better recognition than peer and fan recognition and that is why we are asking everyone in the game to have their say and assist us in selecting this year’s recipients.”

World Rugby Vice-Chairman and Awards panel member Pichot added: “Our objective is to ensure that the awards are relevant and inclusive and that’s why we want fans to have their say, not just at the end of the year when the decision is made, but throughout 2018, so join the conversation and share your player of the year suggestions using the #WorldRugbyAwards.”

Fellow panel member and Women’s Rugby World Cup 2014 winner Alphonsi said: “I am very honoured to be a part of the panel for a second year in a row. Last year was fantastic for women’s rugby and I am equally excited by this year’s awards. I have already witnessed some amazing performances this season and with the Commonwealth Games and Rugby World Cup Sevens on the horizon, I know the Awards in November will be very competitive.”

For more details on the panel members for each of the World Rugby Awards, visit www.worldrugby.org/awards/voting-panel

A new panel, meanwhile, has been confirmed for the International Rugby Players’ Try of the Year, chaired by Isaac Boss of the players’ association. The other members are Marco Bortolami (Italy), Shane Williams (Wales), Ronan O’Gara (Ireland) and Melodie Robinson (New Zealand).

For more on the World Rugby Awards, visit www.worldrugby.org/awards.