The growth of women’s football has catapulted exponentially in recent years and even more was being done to develop the game at grass roots level at the home of English football on Monday.  For St. George’s Park in Staffordshire hosted the launch of Together We Can – a campaign by SSE aimed at inspiring positive change on and off the football field. 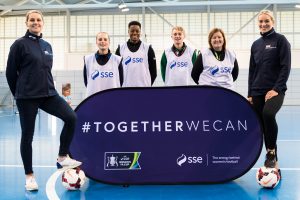 Together We Can brings together the SSE Wildcats scheme, which aims to drive football participation among girls, with the company’s goal of helping young women reach their full potential in science, technology, engineering and mathematics (STEM) through its partnership with education charity Teach First and a broader policy of giving more women and girls employment chances in the energy sector.

More than 180 football coaches also received valuable advice and tips from FA coaches on the site, near Burton-on-Trent, as part of the day, as well as a talk from England legend Kelly Smith and current international Gemma Bonner.

Smith and Bonner were at St. George’s Park to encourage the coaches and pass on their experience and advice to an eager audience of coaches.

“I’m pleased to my name to it and show support for SSE’s efforts to grow women’s game and how it’s developing,” said Smith, England’s record goalscorer with 46 goals in 117 games.

“SSE have put a lot of money into helping us develop the game – it’s a fantastic opportunity and for the coaches to be here and learn from the FA coaching staff.

“They’re not your standard sessions, they’re trying to get as many girls out in an environment where they feel comfortable playing football.

“If I was a young girl now looking to play football, this campaign is fantastic because it gives youngsters opportunities specifically to go into girls’ football session.”

Liverpool skipper Bonner, who has scored once in ten appearances from centre-back for the national side, echoed her former international team-mates’ words.

“When I was young I never lucky enough to have this kind of scheme available – if we can pass on our help and encourage the girls to play even more, it can only benefit us in the long run,” she said.

The SSE Wildcats scheme is a drive launched last year which is aimed at attracting girls aged 5 to 11 to take up the beautiful game.

Originally there were 5,000 players across 200 football centres across the UK but this number is expected to shoot up to 900 centres boasting 24,000 new players.

SSE’s partnership with Teach First has seen the SSE Women’s FA Cup taken into schools around the country, often with a couple of star players to boot, to give children the chance to engage with the women’s game.

John Stewart, SSE’s director of human resources, said: “We’re extremely proud to support the SSE Women’s FA Cup; a competition which gives opportunities to clubs across the country no matter how big or small and inspires a new generation of young female talent to follow their dreams and hopefully, one day, realise their ambitions.”

Tracey Crouch, Minister for Sport and Civil Society, also praised the initiative, adding: “Getting more women and girls to take up sport is one of our key priorities.

“It’s fantastic to see the popularity of women’s football continue to rise and it is great that this investment and support by SSE will help further encourage more women and girls into the game.”

Tags: football, SSE, Together We Can