Oulton Raidettes are looking to build on the great success their women’s team have had over the last seven years with the appointment of a new coach and the establishment of a new girls team they are aiming to be bigger and better in 2018. 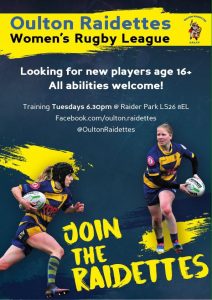 Oulton have appointed Ashley Bond as their new Head Coach for both the Raidettes Open Age team and the girls U12s.  Ashley has previously coached at Hunslet Warriors where he was assistant to Jon Harrison for the open age women’s team and also their U14s girls.

The newly formed girls team for the 2018 season is the Oulton Raidettes U12’s, with Ashley Bond as Head Coach and Chloe Kerrigan as the assistant coach.

Chloe is currently a member of the open age Raidettes team at Oulton and has recently joined the Leeds Rhinos U19’s academy squad for the 2018 season she is also studying towards her level 2 coaching qualification.

With the formation of the U12s the Raidettes now have a great pathway with U14s  and the Open Age team.

The U12s are looking for more players to add to their number and are encouraging girls with or without experience to come along and join their Tuesday afternoon training.

As a group the Club is looking forward to the 2018 season having recruited well and retained some exceptional talent.  They are still recruiting and always on the look for new talent and whether girls/women have played before or not they are welcome to go along, have fun and join the ever growing women’s game of rugby league. 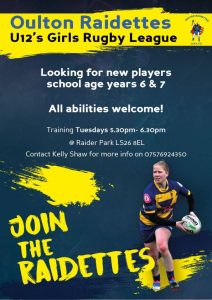 Training for the Open Age group also on Tuesdays from 6.30 at Raider Park.

No experience required only the desire to join in, learn new skills and make friends.

On Sunday 11th March Oulton Raidettes will play Hunslet Warriors in a pre-season friendly.  The game will be kick off at 2.30pm at Warrior Park.

If you would like any more information about this friendly inclusive club then please check out their Facebook page. 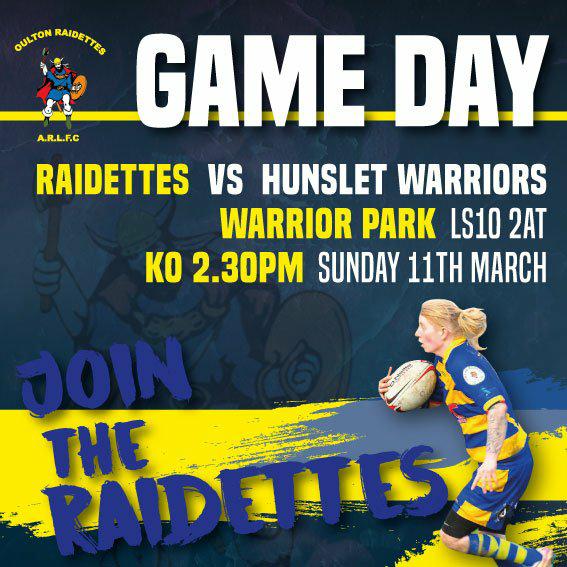 Round 18 of Allianz Premier 15s to be live streamed.

The Vitality Women’s County T20 series is under way.

After the dust has settled.