It proved to be a busy day six for Team GB athletes in PyeongChang with five sports contested, including the start of the men’s skeleton competition where Dom Parsons sits in fourth place at the half-way stage.

Dominic Parsons insists he’ll get a good night’s sleep despite sitting just three hundredths of a second off the podium in the men’s skeleton.

Parsons, 30, arrived in South Korea fresh from his best World Cup result of the season, a fourth place in St Moritz, and posted some impressive times in training.

He was fifth fastest on the first run but improved to fourth overall at the midway point of competition, just fractions behind Latvia’s Martin Dukurs in bronze, the silver medallist from four years ago.

“Let’s not get ahead of ourselves too much. I’ll just focus on the next two runs first,” said Parsons.

“I think blocking it out is a bit counter-productive. I’ll be just make sure I’ve done all the work I need to do before I try to switch off and use something to distract me, a TV show, reading a book or whatever.”

Team leader Andi Schmid added: “It’s a very positive start for us. It’s only the halfway mark but we’re in a good place. We’ve put a solid platform in place to build on tomorrow.

“Dom is very close to the medals and that’s very encouraging. His second run was outstanding. He made a few minor mistakes in his first run but he is looking good so far. I’m really pleased with how he has performed.”

Eve Muirhead maintained a cool head under pressure to restore some momentum to her Olympic campaign.

Muirhead lost out on the final stone of her match with Nina Roth’s American rink but rebounded to beat China’s Betty Wang with the last delivery on the extra end.

Muirhead’s rink – Vicki Adams, Lauren Gray and Anna Sloan – have lost just one of their first three games and will enjoy a rest day today to reset their focus.

“If you’d said at the start of the week I’d have won two and lost one after three games then I would have taken that,” said Muirhead, who next play Denmark and Korea.

“It takes a bit of time to get used to the conditions and it’s tricky out there. We’ve adapted quickly and it showed during the end result.

“It came down to a last stone against the USA and we lost out – but that’s the job of a skip to nail those crucial shots.

Thomas Muirhead insists he’s not on a revenge mission ahead of a crunch Olympic clash with Sweden.

Kyle Smith’s rink kept their nerve to secure a 6-5 final stone victory over Japan, meaning a narrow loss to defending champions Canada remains their only defeat.

But next up us Niklas Edin’s unbeaten Swedish, who swatted aside Denmark and hosts Korea in their opening two matches in PyeongChang.

And that’s a rematch of the recent European Championship final in St Gallen, in which Smith’s rink was beaten 10-5.

“That loss will spur us on and we’d like a bit of revenge but it’s not a special game because of what happened at the Europeans, it’s just another game,” said Muirhead. “We’ve beaten them before and if we put it together then we won’t be far away again.” 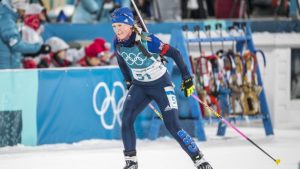 Amanda Lightfoot was left to rue her shooting on the range as she placed 73rd in the rearranged women’s 15km individual event.

Five days on from equalling Britain’s best-ever female biathlete result in the women’s 7.5km sprint, Lightfoot was back on the biathlon course.

The 31-year-old had vowed to work on her shooting accuracy to eradicate the errors which had cost her a higher place than 67th on Sunday.

But unfortunately for the two-time Olympian, it did not translate onto the range on competition day, as four shooting penalties, including three on the final standing stage cost her.

“I’m massively disappointed,” she said. “I missed three at the end, my nerves got the better of me.

“I knew I had to hit those targets but when I came in my legs were shaking, my eyes went blurry and I missed those three. What could have been a great result and maybe even top ten wasn’t to be.”

Annika Taylor vowed to come back stronger from her maiden Olympic Games experience as she finished 75th in the women’s 10km free event.

The cross-country skier found the going tough, eventually crossing the line in 30:52:09, just under six minutes behind gold medallist Ragnhild Hagg of Norway.

And while enjoying her first taste of representing Team GB, the 24-year-old insists it has only whetted her appetite for more.

“That was a solid race but my goal was top 30. Unfortunately things haven’t quite gone my way this year but that’s only making me motivated because I know I have it in me,” she said.

“My body just hasn’t done what I wanted it to this year. It’s frustrating but I’ve grown a lot as a person and I can handle a lot of pain now.

“I’m putting this in the bank and coming back stronger next year and I can’t wait.”

Alex Tilley failed to complete her first run in the women’s giant slalom. She will compete in the rescheduled women’s slalom with Charlie Guest on Friday morning.

She said: “It’s mixed emotions. I’m happy to finally compete at the Olympics but I’m really disappointed with the result. It was a rookie error but you’ve got to take risks.

“I’ll go in to the slalom and just try to enjoy the experience. I’m looking forward to seeing two Brits on the start list and hopefully we’ll be able to do something good.”

What to watch out for tomorrow…

Dom Parsons sits in fourth place, just three hundredths of a second off the podium, ahead of the final two runs of the men’s skeleton at 9.30am (12.30am UK time). Great Britain haven’t won a men’s skeleton medal since 1948.

Zoe Gillings-Brier is the first British snowboarder to compete in four Olympics and goes in the women’s snowboard cross, with qualifying starting at 10am (1am UK time).
Andrew Musgrave – seventh in the skiathlon on Sunday – will tackle his main event, the men’s 15km, at 3pm (6am).

It’s a rest day for Eve Muirhead’s women’s rink but Kyle Smith’s men are in action against Sweden at 8.05pm (11.05am). They are 2-1 so far after wins over Japan and Switzerland and a narrow loss to defending champions Canada.

Charlie Guest and Alex Tilley will go in the rescheduled women’s slalom at the Yongpyong Alpine Centre at 11am (2am). They are drawn 35th and 42nd.