Team Bath Netball’s Eboni Beckford-Chambers and Kadeen Corbin have been selected by Team England for the Gold Coast 2018 Commonwealth Games.

It will be a third Games for Blue and Gold captain Beckford-Chambers, who helped England win bronze at Delhi 2010 before narrowly missing out on a medal at Glasgow 2014 as part of a Roses squad that also included attacking star Corbin. 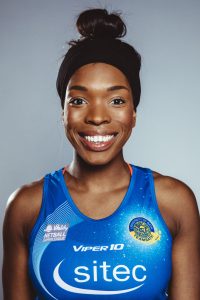 Both are vastly experienced on the international stage and last month helped England defeat New Zealand and South Africa, as well as push World Champions Australia all the way, during a best-ever second-placed finish in the Quad Series.

Beckford-Chambers, a trainee solicitor with Bath law firm and Team Bath Netball Education Partners Mogers Drewett, said: “I am delighted to have been selected to represent Team England at the 2018 Commonwealth Games. This will be my third Championship and I am very much looking forward to seeing what we can achieve on this world stage.

“Over the last four years, netball has grown significantly in popularity, profile and support in England and I believe that, with the backing of our fans, this is a great opportunity to showcase the netball talent that we have in this country.

“It truly is an honour every time I am able to step out in my red dress and I am incredibly grateful for all the support I have received from my family, friends, sponsors, employers and Team Bath in helping me to earn my selection – I am beaming from ear to ear with pride!” 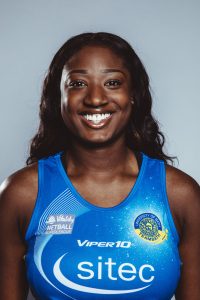 Team England have been drawn in Pool B alongside New Zealand, Malawi, Wales, Scotland and Uganda at the Commonwealth Games, which are taking place from April 4-15.

Head Coach Tracey Neville said: “I think over the current international calendar all players stepped up in performance and there were some tough decisions made in selection. The 12 athletes selected offer us versatility, strength in particular court areas and units, and a wealth of experience with players who can lead the team from the front.”

Netball fans have three chances to see Beckford-Chambers and Corbin in Vitality Superleague action for the Blue and Gold at the Team Bath Arena before the mid-season break for the Commonwealth Games.

Tickets are selling fast for the home matches against Surrey Storm on Friday, February 23, UWS Sirens on Friday, March 2, and Manchester Thunder on Friday, March 9. Visit netball.teambath.com/fixtures to purchase or for more information.