Badminton England has confirmed that the YONEX All England Open Badminton Championships will return to the BBC in March. 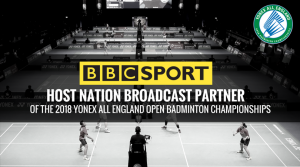 As part of the broadcaster’s recently announced commitment to show more sports across its digital platforms, the partnership will mean British sports fans will get a chance to see every day of the Championships live on the BBC’s online channels when the event returns to Birmingham from 14-18 March 2018.

The YONEX All England, one of only three top tier events on the new HSBC BWF World Tour, sees the very best badminton talent from all corners of the globe compete at the Arena Birmingham over five days.

The oldest and most prestigious tournament in world badminton draws a worldwide TV audience in excess of 221 million households and a global fan base that smashes through the 2.2 billion milestone each year. 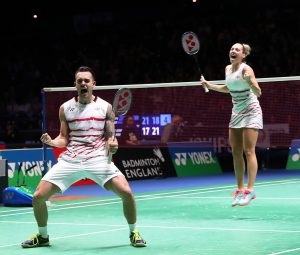 Last March, world class badminton returned to the BBC for the first time in 10 years as visitors to the BBC Sport website and red button digital audience almost witnessed history with England’s Chris and Gabby Adcock just missing out on a place in the YONEX All England final.

It was a feat the world top five pair repeated on the BBC five months later when they won bronze at the World Championships in Glasgow.

Adrian Christy, Chief Executive of the Championships’ organisers Badminton England said: “To have the BBC back on board broadcasting every day of the YONEX All England live is another significant milestone for our sport and one I am sure will play a significant part in inspiring even more than the 1 million adults who currently play badminton each month in England alone.

“We are in no doubt that there is demand from sports fans right across the UK to have access to a wider variety of sport online and on their TV screens – and live, world class badminton brings all the action, emotion and drama fans expect.

“Elite badminton in this country has just enjoyed one of the strongest medal-winning years in recent history with our players winning European and World medals in the past 12 months and our players will relish the opportunity to perform in front of the audience that the BBC brings; the viewing public can look forward to seeing a whole new era of fantastic role models”.

The 108th edition of the YONEX All England Open Badminton Championships takes place between 14-18 March 2018 at the Arena Birmingham.

For more information on the Championships and for tickets, visit: www.allenglandbadminton.com or #YAE18 @YONEXAllEngland