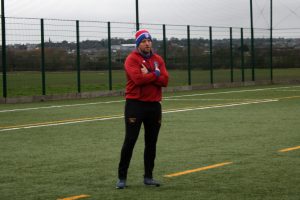 Hirst said “It’s been really good, we’ve had a good response from the girls that have come down and they’ve interacted with us really well and I‘ve been impressed with the skill on show from a lot of them.”

Hirst continued, “We asked for some of our existing squad to come down to help out with the training session, it was good for me to see who I’m going to be working with in the pre-season and the upcoming year. The skill on show was really pleasing and I’m looking forward to the challenge.”

As the men’s superleague side prepare for the kick off of Super League XXIII at Hull KR their female counterparts are gearing up for a tough pre-season in readiness for fixtures in April. 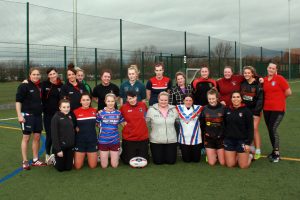 James Stephenson Head of community development at Trinity said “Wayne has put his plans together for a very good pre-season, we’re looking forward to seeing some good numbers down at the ladies base Sharlston Rovers on Monday 5th February. We’re really excited for this year, we’ve got a lot of work to do.  I think we’re going to see a lot of improvement and development in this group and drive forward into a strong position, ready to step up to the Women’s Super League in 2019.” 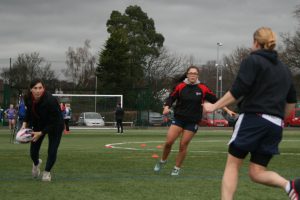 Assisting Hirst in the coaching department will be Becci Brierley and Claire Reynard who took the reins part way through last season and they are looking to continue where they left off last year.

Brierley said “I’m really looking forward to this year, to be back playing again after getting over my injury will be amazing and I’m hoping that being on the field with the ladies will benefit the team.  It’s exciting times, a new coach and a new adventure.  Last year was hard but we ended the season strongly and we seemed to click, it was just a little too late to get that playoff spot.”

Reynard added “It’s been good to get back together as a group after the off season and hopefully we can push on where we left off at the end of last season. I wouldn’t say I’m looking forward to pre-season but we need to push ourselves hard to get to where we need to be for when the fixtures start in April.”

This season the Trinity ladies will take a watching brief over the Women’s Super League which includes new teams like Leeds Rhinos, Huddersfield, Widnes and St Helens.

Head coach Hirst also said: “This season is all about building a strong squad and culture at Wakefield so we’re in a solid position to transition into the Women’s Super League next season.  Today’s session has been open to all abilities we didn’t want to restrict it, we wanted to open the access to all.”

“I’ve played in the community game since 8-9 years old and I’m turning 40 this year and still playing in the National Conference league.  Hopefully I can draw on my experience in the game and pass on to the Trinity Ladies. I’ve also familiarity of the Girls game too coaching Shaw Cross Girls for the last 3-4 seasons. I’ve seen the girls game flourishing and I want to continue that into open age and promote the women’s game at Wakefield.”