England Women Sevens have won the Challenge Trophy at the HSBC World Rugby Women’s Sevens in Sydney after beating Fiji 29-10 in the final.

After narrowly missing out on a place in the Cup quarter finals on day one, England defeated Papua New Guinea 52-0 in the semi-final.

The win means England secure a ninth place ranking at the Sydney 7s as James Bailey’s side continue to build on earlier performances this season. 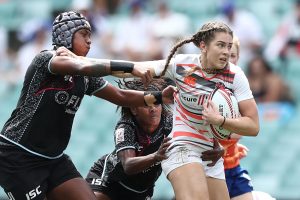 England were first to put points on the board with Jess Breach crossing over the line inside the first minute. Holly Aitchison also dotted down for England as they established a 12-5 advantage at the break. Deborah Fleming followed next and with two late tries from Breach, England secured the win.

It was a dominant performance with Thompson scoring a hat-trick before half-time as England established a 26-0 lead, with Heather Fisher also going over.

Breach scored with her first touch after coming on as a half-time replacement, hitting an excellent line off a pop pass by Fisher.

She got her second as she sprinted around the outside following some good hands, before Deborah Fleming latched onto Holly Aitchison’s lofted pass, and then Breach sprinted through the middle for her hat-trick.

James Bailey, England sevens head coach today said “I was really pleased to see the team show great character and embody our team values in bouncing back from a disappointing day one. We put in two strong performances today and the players showed great skill and execution to put a big score on Papua New Guinea. I’m happy with how with how we put a game plan together and executed it against a good Fijian side also.

“We have still got work to do but we will continue to work extremely hard. As a team we have seen progression in such a short amount of time, although potentially not reflected in our finishing  position. We will take a lot of learnings from Sydney moving forward.

“We are travelling to Brisbane Super7s invitational next weekend, it gives us another opportunity to gain as many sevens playing minutes as possible. We will be looking to maximise this opportunity to trial different styles of play and combinations. We will also be joined by three additional squad members, Natasha Hunt, Vicky Fleetwood and Katie Mason, so again an opportunity to give the wider squad quality playing time, as we focus on building towards Commonwealth Games.”

England had got their campaign off to the perfect start as they beat Dubai finalists USA 28-24 in pool B. James Bailey’s side went down 12-33 in the next game against New Zealand and rounded off day one with a narrow 10-17 loss against Japan.