The England Roses produced a scintillating final quarter fight back before defeating New Zealand 64-57 in a phenomenal extra-time finish at the Copper Box Arena this evening.

With nearly 6,000 fans crammed into the arena for the Vitality Netball International Series, as part of the Netball Quad Series clash, there was barely a spare seat to be had as the Roses edged a classic match which will go down as one of the finest in the year, and perhaps the decade. 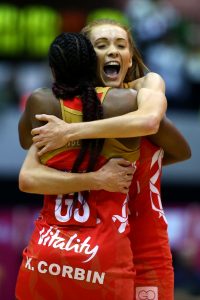 Each team dominated different periods of play and it could be argued that neither side deserved to leave the court without the win.

England had a chance to seal the tie in normal time but a Kadeen Corbin effort agonisingly bounced out, although the clock ran down as the Silver Ferns attempted to steal the win for themselves in the dying seconds.

Rather than ruing a missed opportunity, the Roses hit back fiercely in two extra halves of seven minutes, with Corbin showing her mental strength by leading from the front.

A trio of turnovers, including one phenomenal leap from Player of the Match Serena Guthrie, allowed the hosts to pull clear and finally emerge victorious.

The match started at a ferocious pace with a number of turnover chances missed as the England defence forced mistakes from the visitors in the final third but the Roses attack were unable to capitalise.

With the sides locked at 4-4 early on, a pair of tips from Geva Mentor had the crowd roaring in support but again a mixture of poor passing and good New Zealand defence refused to let the hosts pull into a lead.

With England struggling in the shooting circle, Maria Folau took the opportunity to display her ruthless streak. Goals flew in from every angle as Folau and Bailey Mes produced a perfect shooting quarter to have the Ferns ahead 16-12.

The Roses were looking for a chink in the New Zealand armour and after a Sam Sinclair feed was fired in with too much pace, the team in red took their chance.

A wonderful drive from Helen Housby saw a move capped off by an equalling fine finish. In a flash, the scores were level at 22-22.

It was a complete reverse from the opening quarter as England went on the charge. Corbin was finding her range and proving to be an equal for Folau at the opposite end. At half-time the Roses lead by one, 29-28.

The ebb and flow of the match continued into Q3 with the visitors taking command. Errors from England were being routinely punished with Temalisi Fakahokotau in inspired form at the defensive end.

With the ball breaking down in the mid-court, the reigning Quad Series champions showed their class to move 43-37 ahead moving into the final fifteen minutes.

Changes were made for the final quarter with Beth Cobden coming into WD and Eboni Beckford-Chambers taking over at GD.

With every goal for those in red, the Silver Ferns started to look more fragile. Guthrie and Chelsea Pitman were pulling the strings in the final third as Corbin and Housby pulled the Roses closer.

As the clock moved into the final three minutes, Housby demonstrated her defensive class with an athletic tip into the grateful hands of Beckford-Chambers. This allowed England to level and the crowd to burst into rapturous applause.

Another turnover created by Beckford-Chambers gave the Roses one last chance to win the game in normal time but it was not to be and instead a sensational extra-time performance was enough to seal a hard-fought success.

The Roses are next in action on Monday evening when they take on World Champions, the Australian Diamonds at the Copper Box. Centre-pass will be taken at 7:45pm.