Anyone who has watched Aussie Rules football will have been amazed by the fitness of the players, the speed of the game and the apparent lack of rules.  Many like me will also be taken by the surprise at the growth in the game in the UK and excited by the possibility of being able to enjoy a game.

Almost thirty years ago Australian expats, missing their favourite sport, starting playing Aussie Rules football in the London area.  These days, although London still has the highest participation rates, the popularity of the game has spread across the country and women’s teams are also on the increase.

In the London league the 18 a-side version of the game is played on a large oval.  The women’s teams playing in London are:

These clubs also have men’s teams (sometimes 2 or 3) although there are some men’s clubs that have not yet developed women’s teams.

Outside of London: the Central and Northern England League (in existence approx. 14 years) play a 9 a-side game, generally because there aren’t the large oval pitches available outside of London.

The Scorpions started a women’s team last year and this year they are hoping that Huddersfield and the Wolverines will follow suit.

To begin with the women joined the club and trained alongside the men and the wealth of talented England and GB AFL players based in Nottingham has helped both to form the team and to grow the game.  After forming a team last season the Scorpions entered the Haggis Cup (a Scottish Club tournament) and won.  En route to victory they beat Scottish teams and two London league teams.

This year the Scorpions are hoping to play friendly fixtures against University teams (there are thriving Women’s teams at Oxford, Cambridge and Birmingham Universities) and the other Central and Northern England teams.  They have also been invited to take part in the Champion’s League in Amsterdam. [A tournament for the league winners from each league across Europe.]  The Scorpions will be joined by the winners of the women’s London league in the Champion’s League.

As the game grows in popularity there is momentum to try and get teams going in Devon (Exeter) and also in Sussex.

Outside of England there are a few clubs in Scotland and Wales and some women who also train with men’s teams.

On the international side England compete annually in the 9 a-side Euro Cup an event organised by AFL Europe, in 2017 both England men’s and women’s teams won the tournament fighting off tough opposition from long time adversaries Ireland. They play teams such as Sweden, Croatia, Ireland, France, Denmark, Wales and Scotland.

There are also male and female Great Britain teams; every three years the International Cup is held in Melbourne, Australia.

A men’s GB team has competed for the last 5 tournaments  however last year was the first time the GB women entered. They finished 3rd out of 8 teams!

The men finished 5th which equals their best finished the tournament.

Scorpions will be holding a taster session soon (more details to follow) and you can contact the Scorpions directly through contact details on the poster below. 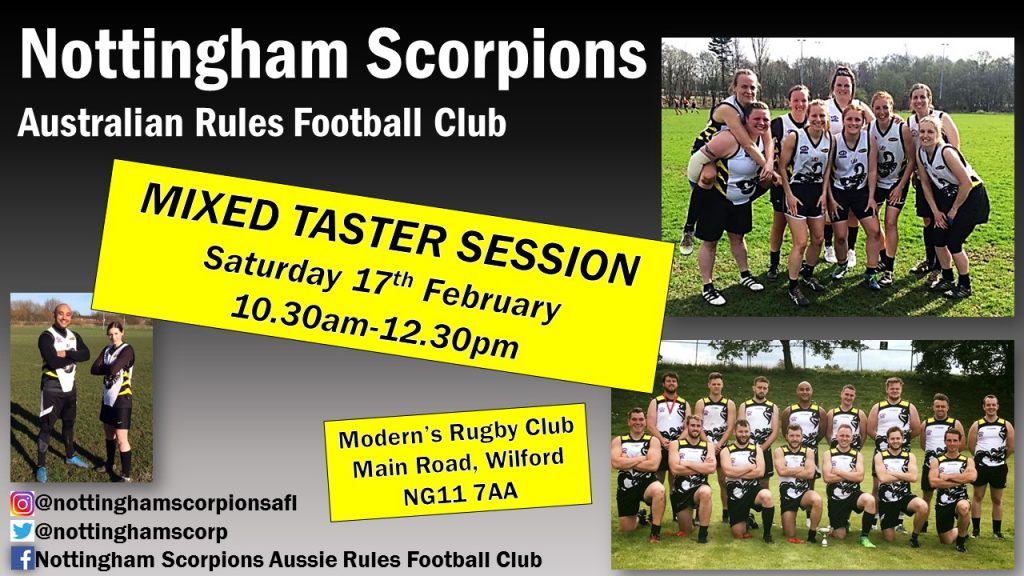