Four of the team that claimed bronze at Sochi 2014 are returning to the Paralympic stage with skip Aileen Neilson contesting her third Games, Gregor Ewan and Robert McPherson making their second appearances, while Angie Malone MBE is set to take part in her fourth Games. 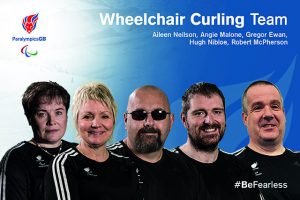 Malone has competed at every Games since the sport made its debut at Turin in 2006. She won silver on that occasion, as well as bronze in Sochi, making her GB’s most decorated Paralympic curler.

Hugh Nibloe is set to make his Games debut after getting a taste of top-flight competition on the Paralympic Inspiration Programme in Sochi.

The team will compete at the Gangeung Curling Centre in PyeongChang, the venue where the same group claimed a bronze medal for Scotland at the Wheelchair Curling World Championships in 2017.

Aileen Neilson said: “I’m delighted to be leading this team into the PyeongChang 2018 Paralympic Winter Games. We have all worked so hard over this cycle and are ready to return to Paralympic competition to take on the best in the world.

“We know the venue well after the World Championships and I am confident that the experience and resilience in this team means that we can go and perform at a very high level.”

Hugh Nibloe said: “It’s incredibly exciting to be selected to represent ParalympicsGB at my first Paralympic Winter Games. We have a really positive team dynamic and have enjoyed a really  encouraging start to the season,  beating  many of our strongest rivals.

“We’ve proven that we can compete at the highest level and we’re heading to Korea to show exactly what we can do.”

“I’d like to congratulate all of the athletes that have been selected to represent ParalympicsGB at PyeongChang 2018. This is a highly experienced group who have shown that they can keep their nerve under pressure to really thrive at the Games.

“During previous Olympic and Paralympic Games we’ve seen the nation really fall in love with curling, and I hope that our fans follow and support these athletes throughout the competition.”

Today’s announcement takes the number of athletes currently selected for ParalympicsGB to 14 after nine alpine skiers and snowboarders were announced last week.