This has been an incredible year for women’s sport and we are hoping that 2018 will serve up more of the same.

My two favourite moments were the Roses win over Ireland to win the Grand Slam for the first time since 2012, and then to be at Lord’s to witness England’s cricketers win the World Cup in such a dramatic way was just amazing.

Here is just a small sample of what we were able to enjoy:

England recalled most of their Sevens players and in a 6 Nations series that was, for the first time, either televised or streamed live the Red Roses swept to a majestic Grand Slam title. 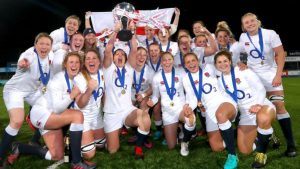 Galvanised by their win the Roses travelled down under to compete in a tri-series with the best in the world: Australia, New Zealand and Canada, a warm-up tournament for the World Cup. The opposition may have been a little tougher but the results were the same as England put in great performances to win all three games and the tournament.

Onto the World Cup and the Roses romped through the group stages before beating France in the semi-final and setting up a long awaited final against New Zealand.  Despite beating the Black Ferns earlier in the year this time the New Zealanders had the final say winning by 41-32.

The final series of the year for the Red Roses was the Old Mutual Wealth Autumn Series where they would play Canada three times – could they bounce back from their disappointment in the World Cup – of course they could.

Simon Middleton introduced new players into the mix and Harlequin’s Jess Breach really hit the ground running, literally, as she scored six tries on debut.  The combination of experience and youth proved a successful one and the Roses took the series 3-0.

Thanks to Bruce Perkins for the numbers. 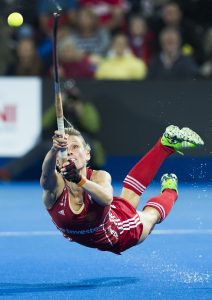 At the beginning of the year Olympians – still beaming from their success in Rio – and new faces excited to take their first steps in international hockey came together to start their new four-year cycle.

England’s return to competitive hockey as a new squad began in late February when they travelled to South Africa and won both matches in the two-game series, with eleven players making their senior England debuts during the trip including Anna Toman, Emily Defroand and Hannah Martin.

Next up was another test series with Spain in Madrid which saw the welcome return of Susannah Townsend from injury. However the series was lost 2-1 to the Spanish.

In June the squad returned home to face both Argentina and the Netherlands in front of packed crowds at Lee Valley Hockey and Tennis Centre for the Investec Internationals. A stunning comeback from 2-0 down against the Dutch also saw Alex Danson score her 100th international goal in front of home support and live on BT Sport.

England returned to South Africa in July for the World League Semi-Finals in Johannesburg and, despite losing to the USA in the semi-finals, put in a stunning performance against Argentina to win 5-2 and take bronze.

The events kept coming in 2017 and in August England set out to defend their EuroHockey crown. They met the Netherlands in the semi-final saw a fantastic match played out in front of 10,000 fans at the Wagener Stadium in Amsterdam but it was the hosts who edged the match 1-0. However England responded in their bronze game against Germany with the impressive Hannah Martin continuing to make a name for herself.

There was further a positive for England as defender Hollie Pearne-Webb was named Player of the Tournament for her outstanding performances at the back, proving herself to be one of the very best defenders in the world.

England under 21 women equalled their senior colleagues by claiming bronze in the EuroHockey Junior Championships in Valencia.

The year has been an exciting one from start to finish as the squad continues to progress and now heads into what can only be described as an action-packed 2018!

It has been a tumultuous year for the Lionesses with a high point reaching the semi-finals of the Euros, where they lost out to the eventual winners the Netherlands by 3-0 and then losing their coach in a somewhat embarrassing debacle that thankfully hasn’t dampened the spirits or achievements of the players.  England’s Jodie Taylor did win the Golden Boot for her five goals throughout the competition.  She also went on to win the BT Action Woman of the Year Award. 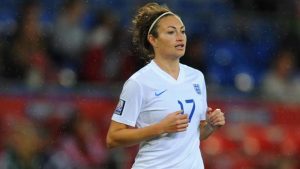 The Lionesses continue their World Cup campaign under Mo Marley as we await announcement of the new coach.

In a push to promote the women’s game and achieve more female professionals the FA will are revising the women’s pyramid and are in the process of assessing applications for licences for the top tier.  Thus far those teams from the existing Super League to apply for status have been accepted, we await word of those that will join them for the 201/2019 season.

Manchester City women beat Birmingham City 4-1 in the FA Cup which was held at Wembley in front of 35,271 fans.

England’s women won a thrilling World Cup Final in front of a packed Lord’s in what was my sporting moment of the year.  India were in a strong position to take the win until confronted by Anya Shrubsole who took 6 for 46 – I do remember saying that if England win this it will be a miracle – happy to believe they do happen!  England took the trophy by just 9 runs!

All the results here. 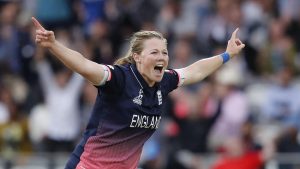 England then went off to Australia to try and bring the Ashes back to England.  This proved a step too far, after losing the first two ODIs in the multi-format series and then drawing the test they needed to win all three IT20s.  Losing the first one meant Australia reached 8 points and retained the Ashes but England showed a massive amount of character to hold out for the draw and achieved some milestones on the way. Winning the second and third IT20s with the highest ever run chase and a maiden century from Danni Wyatt.

England’s women won the team award at the BT Action Woman of Year Award and also at the BBC Sports Personality of the Year.

England’s Lionesses recorded a 2-0 series win over France in July before enduring a difficult World Cup in Australia where they won only one game.

However, with both WRLA Winter League and RFL Summer League both doing well and rugby league attracting more and more younger players the future has to be bright for England teams to come.

The inspirational boxer also launched her Pave the Way programme.

Congratulations to all our sportswomen we look forward to everything 2018 has to bring.

As a site championing women’s sport we have covered more sport than ever, but looking back realise that we can do more and better and that is the aim for 2018.

We are delighted to have forged a new relationship with the FA that will enable more football content although we are going to begin the New Year with an article about Aussie Rules football.

More original content is also promised and we will continue our sporting spotlight series.  If there is anything you would like us to include then please do get in touch.