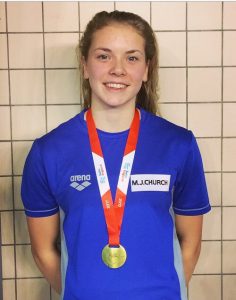 MJ Church ambassador Hopkin, who is also supported by a Thompson Education Trust sporting scholarship, was the first English swimmer home in both the 50m and 100m freestyle, clocking rapid times of 25.33 and 54.76 – a personal best – respectively.

Hopkin, who represented GB at the World University Games this summer, is the reigning British champion over 50m but was particularly pleased with her improvement in the longer event.

“I’ve definitely been focusing on the 100m free and I am happy it has paid off,” she said. “I learnt a lot at the World University Games, it was my first international competition and I really enjoyed the experience.”

Sport & Exercise Science student Hopkin, coached by Mark Skimming at the University’s London 2012 Legacy Pool, also set a new best of 27.24 as she won bronze in the 50m butterfly.

Olympic and World medallist James Guy, a member of the highly-successful British Swimming National Centre Bath led by coaches Dave McNulty and Jol Finck, eased to victory in the 200m butterfly with a Commonwealth Games qualification time of 1:56.66.

Fullalove also won silver in the 200m backstroke in 2:11.70 and there were two runner-up places for double Olympian Andrew Willis, who has already been named in the Team England squad for the Commonwealth Games, as he clocked 1:01.16 and 2:11.10 in the 100m and 200m breaststroke respectively.

Santander Sporting Scholar Jacob Greenow, who studies Natural Sciences, missed out on a medal in the 400m IM by 0.17secs and Calum Jarvis was also fourth in the 100m freestyle.

The Olympic-sized London 2012 Legacy Pool at the University of Bath Sports Training Village is not just open to elite swimmers but members of the public can also use it. Visit www.teambath.com/swimming for more information.