Rowers at the University of Bath won a host of medals, four of them gold, when they competed at the 2017 British Rowing Indoor Championships at the Lee Valley VeloPark on London’s Queen Elizabeth Olympic Park.

There were also silver medals for Amelia Hempleman Adams in the open women’s 500m, Kate Hunt in the U23 women’s 500m and Crew Bath rower James Martin in the U23 lightweight men’s 2k.

Hempleman Adams then teamed up with Zara Mulholland, a bronze-medallist in the U23 women’s 2k, Joe Russell and Ollie Chick to finish runners-up in the mixed relay 4k. Hullah, Hunt, Gwenter and Macro were just outside the relay medals in fourth.

Sam Courty and Sara Parfett, graduates of both the Bath Start programme and the University, won silver and bronze with their respective GB Rowing Team quartets in the open women’s relay 4k. 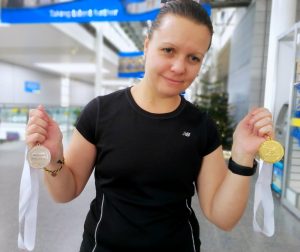 Invictus Games athlete Kelly Ganfield, who is coached by Corinne Yorston at the Sports Training Village, also enjoyed a successful first visit to the Indoor Championships.

The Blind Veterans UK ambassador won silver in the PR3-PD para women 2k race, the first time she had rowed that distance competitively, before teaming up with fellow Invictus athletes to win adaptive relay 4k gold.

Ganfield narrowly missed out on a rowing medal at this year’s Invictus Games in Toronto, Canada, but is training hard towards qualifying for the 2018 event in Sydney, Australia.